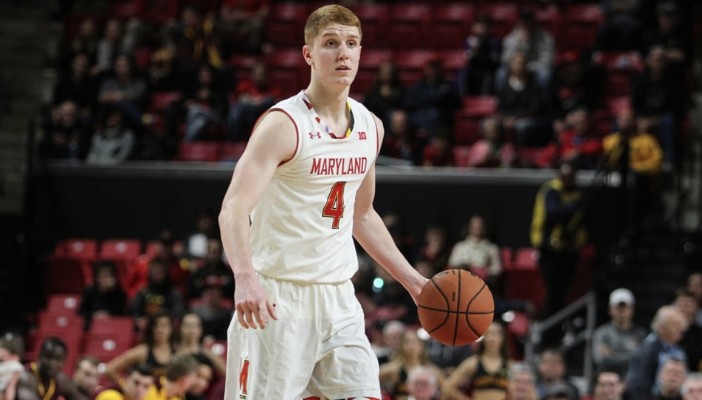 The Miami Heat do not currently have a pick in the 2018 NBA Draft, but that didn’t stop them from meeting with former University of Maryland guard and NBA hopeful Kevin Huerter.

According to the Palm Beach Post, the Heat used one of their 20 allotted interviews at the NBA combine on Huerter after the projected second-round pick turned heads during an impressive performance at the combine’s first five-on-five scrimmage. He finished the scrimmage with nine points on 3-of-9 shooting, three assists, and two rebounds.

“It went well,” Huerter said of his meeting with Miami. “It wasn’t an intense environment, which is nice. It really felt like we were just having a conversation and they were just trying to get to know me.”

Huerter didn’t only make his mark in the scrimmage. The 6-foot-7 youngster had the top shuttle run among the 40 players who participated in the combine. He also impressed as a shooter. He finished first in the spot-up right-side shooting, right corner NBA shooting, and on-the-move 15-foot shooting.

Huerter, who averaged 14.8 points, 5.0 rebounds, and 3.4 assists per game last season, has yet to hire an agent and has until May 30 to decide on whether or not he wants to return to college for his junior year.

If he does decide to stay in the draft, it seems he would be happy to end up in Miami.

“My favorite player has always been LeBron [James], so those four years I watched them a lot,” Huerter said. “And obviously, everybody knows Miami is Miami. It’s a vacation spot, so that’s obviously really enticing. You got to be able to handle it, but Miami is a great spot. They come from a winning culture and they’re expected to win there. That’s what you want to play for.”

It’s clear that a lot of pieces would have to fall in the right place for Huerter to become the newest Heat rookie. It’s also clear that if that does come to pass, he could be a great addition both on and off the court.

With over two months until the draft, the Heat have quite a lot of time to get themselves a draft pick. If they manage to do that, Huerter will definitely be someone to keep an eye on.
[xyz-ihs snippet=”HN-300×250-TextnImage”]