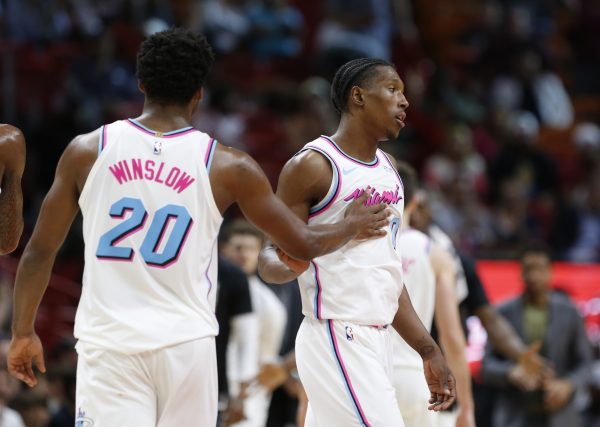 The Miami Heat could be shorthanded when they take on the Dallas Mavericks on Thursday.

Josh Richardson is listed as questionable with a left heel bruise on the NBA’s injury report. Of course, Richardson is a key component for the Heat as he’s been one of the key factors in the team’s recent resurgence.

Over the last 15 games, Richardson is averaging 14.1 points, 3.9 rebounds, and 4.6 assists per game. In those games, the Heat are 10-5. Despite the team’s successful March, the Heat are 0.5 games behind the eighth-place Orlando Magic.

As a result, losing Richardson could be a major blow at a point where every game has major playoff implications.

Furthermore, Justise Winslow is questionable on the injury report as well with a right thigh bruise and Rodney McGruder is out with knee soreness. Winslow has developed into a vital player for head coach Erik Spoelstra, but he has struggled to stay on the court.

Unfortunately, Winslow has missed the teams last six games. On the bright side, the Heat are 4-2 in those games.

The playoff race should come down to the final few games of the season. If Miami hopes to leapfrog the Magic, Detroit Pistons, or Brooklyn Nets, they can’t afford any slipups. Unfortunately, injuries could pose a major threat to their playoff hopes.
[xyz-ihs snippet=”HN-300×250-TextnImage”]