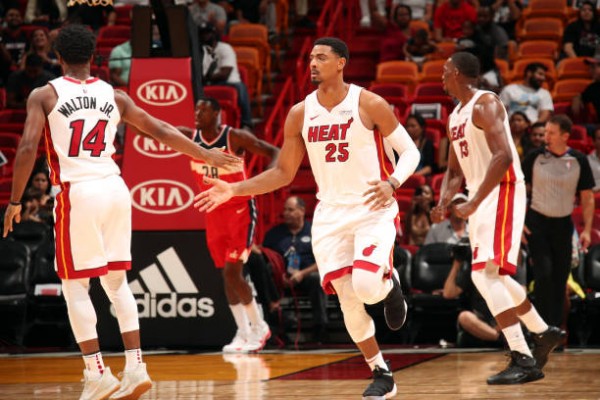 The Miami Heat made a decision on Thursday on their 2018-19 option for forward Jordan Mickey, which immediately made the 23-year-old a free agent. The move was the first of the offseason for the Heat front office, which is hoping to make the necessary changes to make a deeper playoff run.

Mickey was originally a second-round draft pick of the Boston Celtics in 2015 and played parts of two seasons with the Celtics. After being waived by the Celtics last July, Mickey was signed to a multi-year deal by the Heat and played 23 games during the past regular season. He saw no action in the five playoff games against the Philadelphia 76ers.

In those 23 games, Mickey averaged 12.3 minutes per game. He started three of those contests, then ended the year with averages of 4.0 points and 3.6 rebounds per game.

While Mickey’s contact wasn’t picked up, the team could potentially re-sign him to a smaller deal as it seeks to find ways to avoid getting hit with a large luxury tax bill next season. Among other potential free agents, the Heat must also decide whether to offer the duo of Derrick Walton Jr. and Derrick Jones Jr. qualifying offers in order to make them restricted free agents. Four other players, including Wayne Ellington and Dwyane Wade, will become unrestricted free agents.
[xyz-ihs snippet=”HN-300×250-TextnImage”]