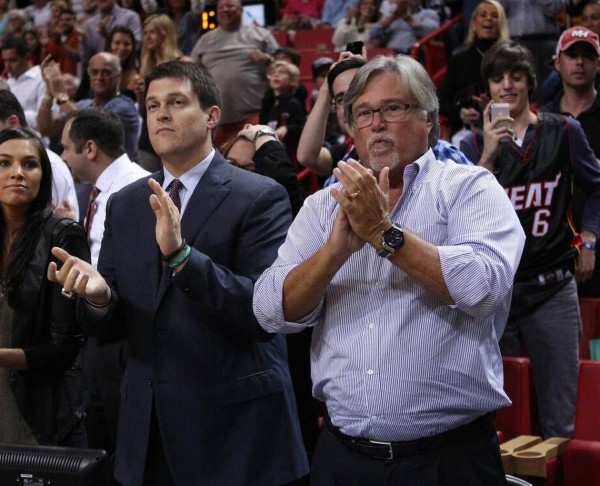 With the destruction caused by Hurricane Harvey in the Gulf Coast reaching historical numbers, many have already come to the aid of those who have lost nearly everything. On Wednesday, Miami Heat owner Micky Arison answered the call as well, when he and his company pledged at least $2 million to aid those affected by the catastrophic storm.

According to a press release from the Carnival Cruise Line and Carnival Foundation, both the company and its philanthropic organization will donate $500,000 each. Arison and his wife Madeleine have pledged to match the $1 million donation with an additional $1 million from the Mickey and Madeline Arison Family Foundation.

The press release added that Carnival employees will also be participating in the cause and have offered guests sailing on certain cruises an opportunity to make donations of their own as well.

“Our hearts go out to all those who have been impacted by the devastation of Hurricane Harvey and its aftermath, and all of us throughout the Carnival Corporation family feel a responsibility to do our part in supporting relief and rebuilding efforts in a region that we call home and where so many of our guests and business partners live and work,” said Christine Duffy, president of Carnival Cruise Line. “We are very committed to the Gulf Coast as a vibrant and special part of the North American cruise industry, and our commitment will remain as strong as ever during the region’s recovery process. We know this storm is still active, so we will continue to hold positive thoughts for everyone in the region while exploring ways to support affected communities as they recover and rebuild.”

Arison is not the only member of the NBA to donate money to those in need. Earlier this week, Houston Rockets owner Les Alexander pledged $10 million, and newly acquired Rockets point guard Chris Paul donated $50,000 to the Houston Food Relief Fund as well.

Hurricane Harvey has rocked the city of Houston to its core, and while it will likely take years before the city fully recovers, Arison’s incredible contribution will surely help the city and its citizens brave this terrible tragedy.
[xyz-ihs snippet=”Responsive-ImagenText”]