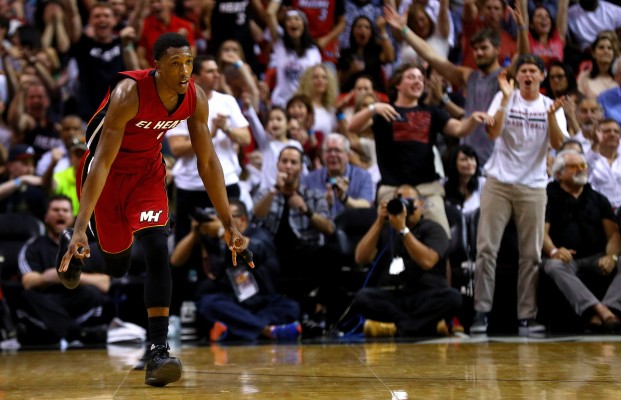 The prospect of both Josh Richardson and Josh McRoberts taking the court for the Miami Heat moved forward on Thursday when the two took part in a full-contact practice. The appearances mark the first time, since the two players suffered their respective injuries, that they have been able to practice with the team.

Anthony Chiang of the Palm Beach Post wrote that Richardson is currently listed as questionable for the Heat’s Friday night road clash in Toronto. It’s been eight weeks since he suffered a partially torn MCL, which was the maximum time expected for his recovery.

Speaking about his knee during practice, Richardson was optimistic:

“It felt good,” Richardson said. “Every movement I did felt fine. I was excited to be back in practice. … I think about (my knee on the court) sometimes. But a lot of the time I just have to say, ‘Forget about it and don’t think about it’ and just go until I feel something.”

As far as what his role will be when he returns, Richardson stated that working in tandem with Goran Dragic is the likely approach.

“I haven’t been able to feel it like in a game setting, so I can’t really say,” Richardson said. “But just looking from the bench, I would probably say just being another ball handler with Goran and giving him a break and just running the offense.”

McRoberts has been seeking to make a comeback from his broken left foot that he suffered during Game 6 of last year’s Eastern Conference semifinals against the Toronto Raptors. That comeback was extended due to a stress reaction, with the team offering no hint as to a date when he’ll be ready to return.

The Toronto game is the first in a two-game road swing, with the latter contest taking place in Oklahoma City on Monday night.
[xyz-ihs snippet=”Responsive-ImagenText”]