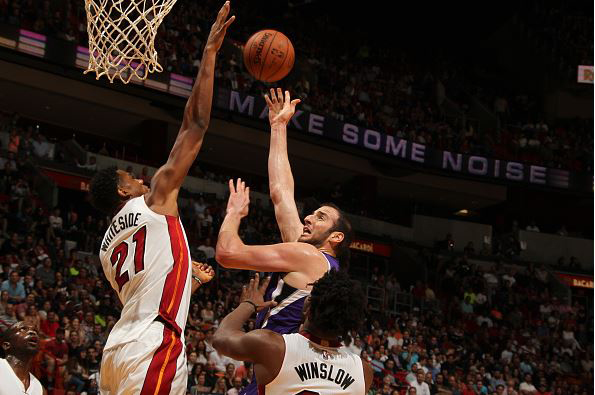 Hassan Whiteside may be a bench player, but that doesn’t mean he’s still not a damn good defender.

According to ESPN, Whiteside was the Stats and Info Defensive Player of the Month for February. It marks the second straight month that the Miami Heat center has been bestowed with the honor.

For the 2nd straight month, Hassan Whiteside reigned as the game’s top defender. The numbers behind the excellence https://t.co/j2VX6PWTtB

There were numerous candidates, including Andre Drummond, Nerlens Noel, DeAndre Jordan, Al Horford and Paul Millsap. However, ESPN Stats and Info gave Whiteside the accolade due to the fact that the Heat’s defense allows fewer points per 100 possessions with him on the court:

“Whereas Drummond enjoyed a slight edge in defensive rebounding, Whiteside’s rim protection is the trump card for February. Whiteside allowed opponents to shoot 41 percent at the rim compared with 52 percent for Drummond. The Heat center did it while contesting 10.8 attempts per game, which ranked second in the NBA, despite playing less than 28 minutes a night. On a per 36-minute basis, Whiteside contested more than five more shots at the rim than Drummond.”

While there has been a lot of negative talk surrounding the 26-year-old center due to his impending free agency and immaturity issues, it’s hard to deny his impact on the Heat when these statistics are presented.
[xyz-ihs snippet=”Responsive-Ad”]