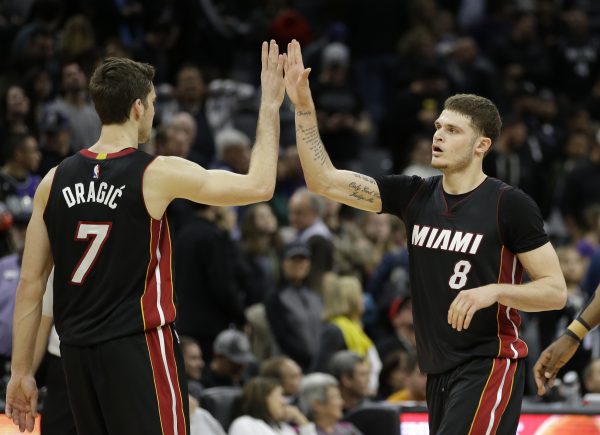 The Miami Heat will have to face another opponent without a true point guard, as both point guard Goran Dragic and reserve combo guard Tyler Johnson are listed as out for Friday’s game against the New Orleans Pelicans.

Dragic, however, was able to practice with the team on Thursday, and appears on the verge of returning back to action.

Johnson did not practice, and the Heat have stated that they will reassess his condition next week. Johnson is suffering from a strained right hamstring.

When Dragic has been in the lineup, he’s been contributing 16.3 points per game while dishing out a team-leading 4.7 assists per game. That means he’s not only scoring for himself, but also opening up the offense and putting his teammates in position to score.

“Goran comes in, and he doesn’t really turn the ball over much, so we got to try to replicate that,” said Heat guard Josh Richardson. “But really, just getting shots on goal is a big thing for us.”

Richardson is leading the Heat with 20.5 points per game. But with Dwyane Wade in his final season, and guard Dion Waiters out indefinitely, the Heat are starved for scoring, and Richardson alone cannot provide it all.

Johnson, meanwhile, has been coming off the bench and contributing 11.4 points per game.

With Dragic and Johnson both out, veteran guard Wayne Ellington and fourth-year forward Justise Winslow have been regularly called on to bring the ball up the floor for Miami.

The Heat are known for their positionless offense. When they face Anthony Davis and the Pelicans on Friday, they will once again have to do without the position of their starting point guard.
[xyz-ihs snippet=”HN-300×250-TextnImage”]