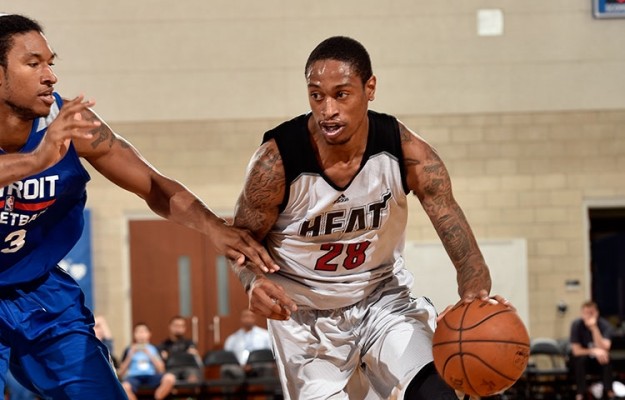 It looks like five familiar faces will be joining the Miami Heat’s D-League affiliate this month.

Greg Whittington, Keith Benson, Corey Hawkins, Tre Kelley and Briante Weber are all listed on the training camp roster of the Sioux Falls Skyforce. Training camp opened on Monday for the Skyforce and it will conclude on November 11th.

The only player who was cut from the Heat’s training camp roster that will not join the Sioux Falls affiliate is John Lucas III.

Whittington, Benson, Hawkins and Weber were all added as “affiliate” players. Kelley was added as a “returning” player, due to the fact that he played with the Skyforce two seasons ago.

Notable players who are also on the Sioux Falls roster are none other than shooting guard DeAndre Liggins and center Byron Mullens. Liggins has played 57 career games in the NBA, and even appeared in one contest for the Heat during the 2013-14 season. Mullens has played five seasons in the NBA, with 66 career starts.

The Skyforce will open their regular season on November 14th. They must trim their roster to a maximum of 10 players by November 12th.
[xyz-ihs snippet=”Responsive-Ad”]