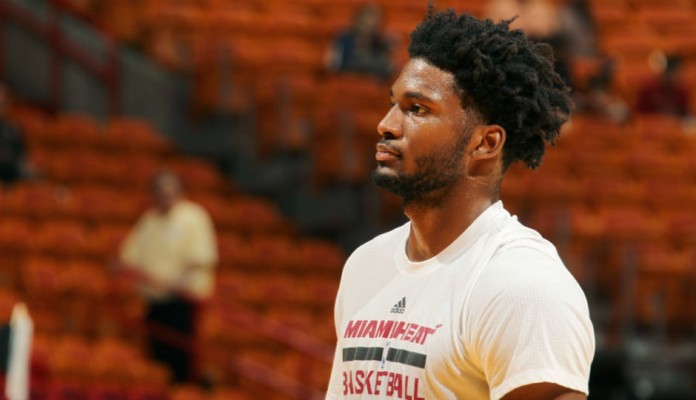 The wrist injury suffered by Miami Heat forward Justise Winslow might not end up requiring surgery, though Heat head coach Erik Spoelstra indicated that it will likely involve having Winslow wear a splint off the court for the remainder of the year.

“He probably will be in one for a large part of the season, whenever he’s not on the court, and that’s just to stabilize it,” Spoelstra said. “Anybody that’s hard wrist issues, you have to wear a brace when you’re not active, and it helps. Any little bit helps. But that’s more precautionary. He doesn’t necessarily need it.”

That status update comes nearly one month after Winslow’s last on-court appearance, a loss to the San Antonio Spurs on Nov. 14. In that game, his early-season shooting struggles continued with a 3-for-11 performance.

Since that time, Winslow has undergone extensive rehabilitation, something that’s garnered positive results for his wrist, according to Spoelstra.

“It actually has gotten significantly better,” Spoelstra said. “It was a sprain. He continued to play with it, continued to re-aggravate it. And then we shut him down, we started the process of healing it and then rehabbing it and then re-strengthening it. And he’s getting better. He’s doing more court work each day.

“I would say probably now is when you’re starting to see, OK, he’s probably getting pretty close to full-contract work on the court. But last week was an important week. He put in a heavy workload, a lot of conditioning, a lot of rehab, a lot of treatment. And he was able to step up a little bit more to do more court work.”

Avoiding surgery would at least allow Winslow to contribute during the course of the season. The alternative isn’t something Spoelstra wants to consider.

“I think right now all of our hopes are that he won’t need it,” Spoelstra said, “and that’s why we went through extensive treatment and rest. And right now it looks like we won’t need to go that route.”