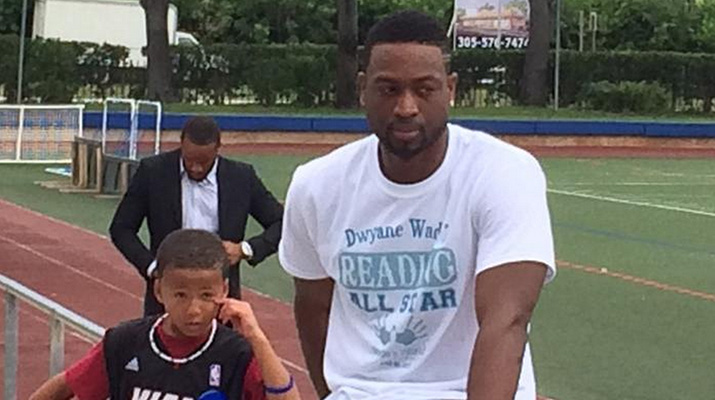 As we inch closer toward free agency in July, the prevailing topic surrounding the Miami Heat is that of the situation regarding Dwyane Wade.

With Wade holding a player option for the 2015-16 season that has yet to be exercised, what are his exact thoughts on the situation?

The veteran shooting guard made his scheduled appearance at the “Reading Playoffs” at Miami Country Day School on Saturday, but once again refused to comment on his contract talks with the Heat.

During question-and-answer sessions with the youth, Wade revealed that he is taking an upcoming four-day class at Harvard University on the business of sports media and entertainment.

While he was mum on contract talks, he did comment on his attending of Harvard: “I’m going to class. I haven’t been to school in a long time.”

The event brought together 100 middle-school students from Broward and Miami-Dade counties as they participated in four rounds of competition. Students were selected by Wade’s World Foundation and ten participating organizations.

Neither the Heat nor Wade have publicly commented on Wade’s contract status. The only individual to make any statements involving No. 3’s contract has been Wade’s agent, Henry Thomas. He confirmed that there were ongoing discussions revolving around a new contract for Wade, but had little else to say about where both sides stand on the issue.

Wade averaged 21.5 points and 4.8 assists on 47 percent shooting from the field this past season. He has until the end of the month to opt-in or terminate the deal and become a free agent on July 1.
[xyz-ihs snippet=”Responsive-ImagenText”]