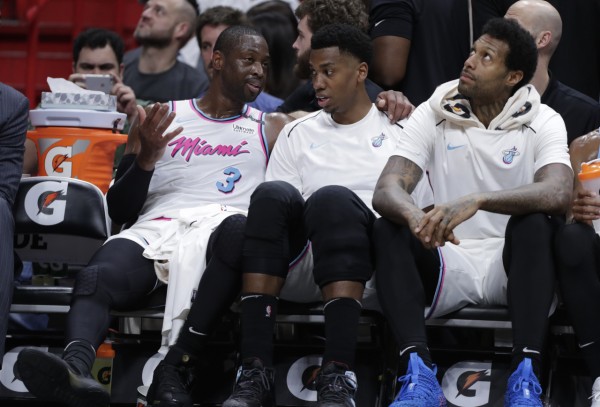 The Miami Heat are on the verge of beginning their second to last road trip of the 2017-18 regular season on Friday night. During those two road games, they’ll certainly look to continue their current three-game winning streak. It also appears that they may be looking to get back some serious help in the form of Dwyane Wade and Hassan Whiteside returning from injury.

Both stars were initially ruled out for Friday night’s game versus the Oklahoma City Thunder, but it now seems that Wade may suit up for tonight’s game.

Hassan Whiteside and Dwyane Wade are listed as out for Friday’s game vs Thunder. But both are traveling with the Heat for the two-game trip.

Every game at this point in the season carries big implications, but Sunday’s game could be especially impactful. The Pacers currently sit two spots ahead of the Heat in the Eastern Conference standings, but are just two games ahead of them. A Miami win on Sunday would cut a huge chunk out of Indiana’s advantage in the standings, and give the Heat a real shot at entering the playoffs with a much more favorable first-round matchup.

Both Wade and Whiteside have been out for nearly an identical amount of time. The 7-foot center suffered an injury to his left hip flexor and has been out since the win over the Philadelphia 76ers on March 8. Just two days later, Wade strained his left hamstring and hasn’t seen the court since.

Before their departures, both players were playing some of their best basketball of the season. Wade had been averaging 17.2 points per game over his last five games, and Whiteside had put on a monstrous performance against the 76ers, finishing that game with 26 points, eight rebounds, and two blocks.

Hopefully both Wade and Whiteside are able to reclaim that kind of success upon their returns, and help the Heat continue their current winning streak as they play their final regular-season games before the playoffs begin.
[xyz-ihs snippet=”HN-300×250-TextnImage”]