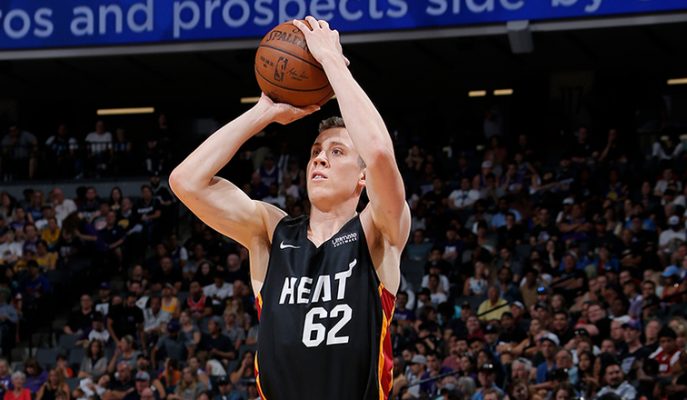 The life of an undrafted NBA rookie is an uncertain one, with no guarantee that he’ll even make a team that’s willing to sign him to a contract. In the case of former University of Michigan forward Duncan Robinson, focusing all of his energies into making the Miami Heat means that he’s giving up the opportunity to play for USA Basketball during qualifying rounds for next year’s World Cup.

The limited number of available roster spots and the competition of players in the same boat as Robinson serve as chief motivators in his choice. More spots may open up depending on the decisions about possible retirement made by veterans Dwyane Wade and Udonis Haslem.

Robinson offered some insight into why he made the decision.

“I mean the margin between having this job or being overseas or being in the G League, whatever it might be, is so thin,” Robinson said. “And I understand that. I understand I caught some breaks and was able to put myself in a situation to be successful. I’m certainly thankful for that.

“This whole last couple of months, there hasn’t been much time to kind of stop and sit back and reminisce. It’s always been kind of what’s next, what’s next, and that’s where it is right now.”

Robinson was signed by the Heat after not being chosen during June’s NBA draft. Ira Winderman of the Sun Sentinel explained the economic incentive incentive in Robinson shifting his focus toward making the team:

“Although signed to a two-way contract that would limit him to 45 days in the NBA this coming season and maximum earnings of about $385,000, Robinson remains eligible to be converted to a standard contract.”

Maintaining a presence during the team’s offseason training, especially when it comes to bulking up, would be an important way to stay on the Heat radar.

“It’s one of the first things you notice in terms of the day to day, how much goes into the strength and conditioning aspect,” Robinson said of the Heat’s strength program. “They do such a good job. This is week three or four for me and it’s impossible to ignore. That’s another big reason why I feel like I’m in a good spot, in that my body has a long ways to go, get strong and just get into world-class shape.

“I’ve really got to prove that I can guard multiple positions, because that’s going to ultimately be what makes me stick in this league. So that and then offensively continue to grow my game, having an understanding of what I do well, which is shoot, and then, on top of that, raise the level of my offensive skill sets.”

“I’m really proud in the fact that Duncan Robinson has been invited to play in the international series,” Riley said of the September window for World Cup qualifying, “but he decided to stay here because he wanted to make our team, he wants to force us into giving him a real contract.”

Even though Robinson is now zeroing in on enhancing his prospects of playing with the Heat, the heavy competition offers him no opportunity to rest on the laurels of his success in Las Vegas. His challenge will begin in another month when the team’s training camp opens.
[xyz-ihs snippet=”HN-300×250-TextnImage”]