The One Caveat Regarding Justise Winslow’s Rookie Contract Extension 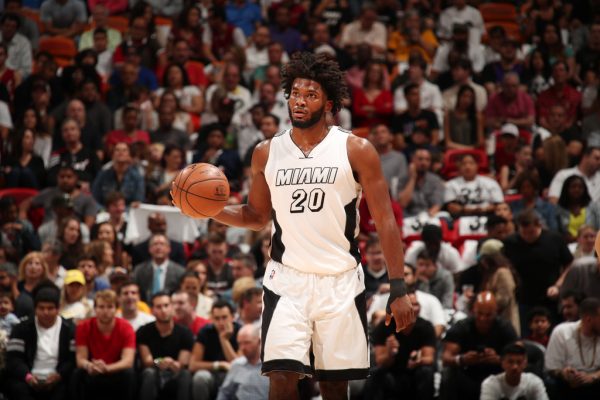 One of the uncertainties of this past offseason was settled on Friday when the Miami Heat and Justise Winslow came to an agreement on a three-year contract extension worth $39 million.

Afterwards, an NBA insider pointed out one key aspect that could ultimately affect whether or not Winslow is with the team during the final season of his new deal.

Winslow’s name had periodically been mentioned in trade talks, though the new deal makes it unlikely that will happen, at least for this season. That could potentially affect an attempt to acquire Jimmy Butler from Minnesota, since Winslow was among the names mentioned as possible pieces of the deal.

ESPN’s Bobby Marks pointed out that what’s known as the “poison pill” provision, which will make trading Winslow extremely unlikely:

“The rookie extension for Justise Winslow now comes with the poison pill provision. Although Winslow can still be traded, the restriction makes it extremely difficult during the 2018-19 season. For trade purposes, the Winslow salary would count as $10.6M towards incoming salary for teams interested in acquiring the forward. This amount reflects the average in the last year of his rookie contract and new extension. The Heat would use $3.5M (last year of his rookie contract) as outgoing salary for trade purposes. The Heat are now slightly above the luxury tax threshold for 2019-20 with a projected $133M in guaranteed salary and 9 players under contract.”

The debate over whether to sign Winslow to the extension was because of the uncertainty about his potential for the future. While he’s offered hints that he can handle the ball and provide solid defense, it hasn’t been over an extended period of time. In addition, he played in just 18 games during the 2016-17 season because of injuries, raising some questions about his durability.

The 6-foot-7 Winslow is just 22 years old, having been the 10th overall selection by the Heat out of Duke University in the 2105 NBA Draft. In his three seasons, he’s averaged 7.5 points, 5.3 rebounds and 2.0 assists. He’s scheduled to make just under $3.5 million in the final year of the rookie deal he signed after being drafted.
[xyz-ihs snippet=”HN-300×250-TextnImage”]