Amar’e Stoudemire Says Miami Heat Are Saving Him for Playoffs 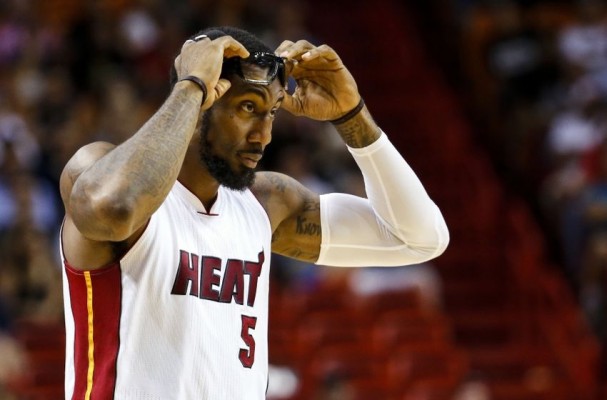 Amar’e Stoudemire has played in just two games so far this season.

While many would guess it’s because the 33-year-old is struggling through injuries, that couldn’t be further from the case—it’s actually because he’s on a long-term maintenance program. The maintenance program is designed to keep Stoudemire fresh for the playoffs.

According to Stoudemire, via Shandel Richardson of The Sun Sentinel:

“We’ve got a big picture in mind. We know we want to be there in the postseason. We want guys to stay healthy. Now, it’s not about wearing somebody down during the regular season. It’s about really just keeping the maintenance program and making sure we’re at 100 percent strength by the playoffs.”

The Miami Heat big man made his second appearance of the season in the 116-109 win over the Sacramento Kings on Thursday night, scoring 10 points on 4-of-5 shooting in just eight minutes, all of which came in the first quarter.

“Right now, we’re not even focused on production. We’re just focused on him getting more acclimated.”

Spoelstra stressed that Stoudemire has had no physical setbacks since training camp began. The 6’11” big has spent most of his time preparing for the sporadic schedule by working out before and after the games he doesn’t play.

Teammate Chris Bosh gave his take on the situation:

“It’s November. It takes a long time. His body has to recover and react from all the tough things that he’s gone through over the course of his career. He’s always going to be ready no matter what. He didn’t have a setback from Thursday, that’s good. We’re a big-picture team. This team was assembled to do special things in the spring. We have to keep that in mind as we continue to ascend to where we want to go.”

This is an interesting situation considering the Heat could use scoring from a player like Stoudemire off of the bench. While it’s nice to see the team is thinking of the long-term picture, if the 33-year-old is playing once or a couple of times every three weeks, how is he going to get acclimated to when the game gets more physical during the postseason?

The Heat believe this maintenance program is in the best interest of the team and Stoudemire, so we’ll see how this plays out over the course of the season.
[xyz-ihs snippet=”Responsive-Ad”]