Report: Udonis Haslem Not Set on Retirement at End of Season 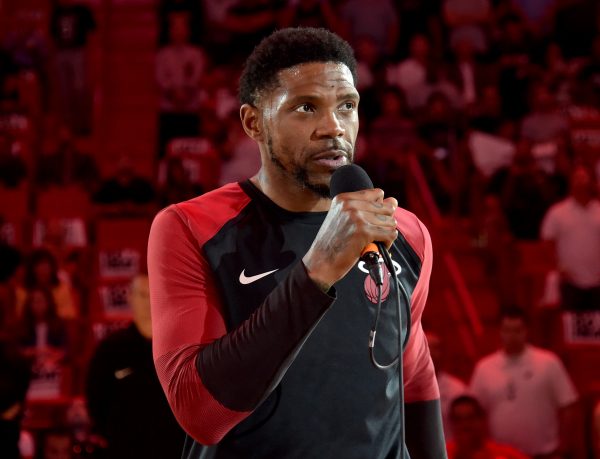 For the past 16 seasons, Udonis Haslem has put on a Miami Heat jersey and has been a vital presence both on and off the court.

While signs have pointed to the fact that he is close to calling it quits, a recent report by Shandel Richardson of The Athletic indicates that the veteran big man might embark on another season.

“I’m not 100 percent sure I’m done,” remarked Haslem. “I know I said I had nothing else to prove. It’s coming close but, man, I still have so much to give. We’ll see. I’m going to talk to Nick Arison and talk to the guys and just weigh my options. I’ve still got the fire to burn. I’ve still got something to contribute.”

Haslem has only appeared in four of 56 games this season, but practice has been where he’s shined as a leader for the Heat. He  has consistently worked with the younger players on the roster, helping them learn and grow into players that have played pivotal roles on a scrappy Miami team.

The franchise leader in rebounds may not see much court time these days, but it’s clear that he’s still an important part of the team. In fact, it seems like Heat head coach Erik Spoelstra doesn’t even want to entertain the idea that this is Haslem’s final year.

“They (Haslem and Wade) don’t have to make their decisions together,” said Spoelstra. “UD means so much to our culture, particularly when he’s in uniform, and that’s not dependent on how many minutes he’s playing in a game. I would love for him to come back. If that means we have to let everything just kind of settle after the season, give him a little bit of time and then we can put on our recruiting hats again. When free agency starts, he’ll be No. 1 on my list.”

Whether Haslem suits up for the Heat next season or decides to call it quits in terms of his playing career, there’s little doubt that he’ll go down as one of the most important NBA stars to every play in South Florida.
[xyz-ihs snippet=”HN-300×250-TextnImage”]