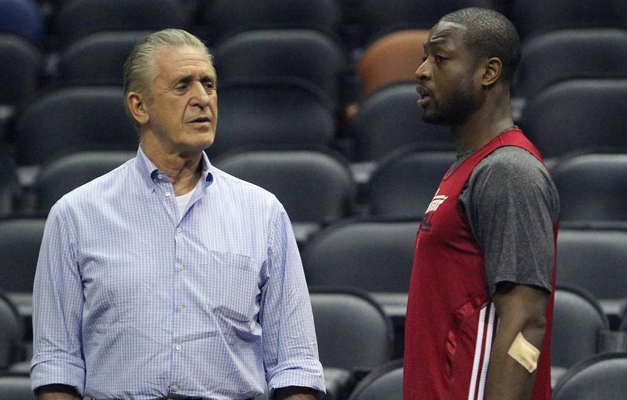 Dwyane Wade is officially on the open market.

Miami Heat fans should start hoping that other suitors don’t have anything exciting to offer Wade because he is beginning to take meetings with other teams.

According to Adrian Wojnarowski of The Vertical, Wade will meet with the Denver Nuggets tomorrow in New York. Also, the Chicago Bulls have maintained “significant interest” and are still hoping to get a meeting with Wade.

In addition, Marc Stein from ESPN.com has reported that the Nuggets have the cap room and are willing to pay Wade’s asking price that was revealed earlier today. Sources confirmed to The Vertical that they are willing to offer a two-year, $52 million deal to Wade.

The Nuggets' two-year offer to Dwayne Wade is north of $50 million, according to league sources, with Denver still hopeful Wade accepts it.

The Nuggets are an interesting proposition for Wade because he would be entering the role of being a mentor to some young guards like Jamal Murray and Emmanuel Mudiay. However, Wade would almost certainly be taking himself out of contention for his fourth championship ring considering the stiff competition in the Western Conference.

Nevertheless, the Heat are still hopeful that they can convince Wade to stay.

According to The Vertical, Wade is looking for a third year in his deal, which the Heat have not been willing to offer so far. After Wade made it clear that he would not be accepting the Heat’s two-year, $40 million offer, there have been a flurry of reports about the status of the relationship between him and the Heat — or what’s left of it.

Dan Le Batard went on his ESPN radio show on Tuesday and said simply that Wade does not trust the Heat anymore.

“The relationship has never been in a more dangerous place when you consider Golden State is going to get (Kevin) Durant with all their players to recruit him and you consider the (San Antonio) Spurs going with LaMarcus Aldridge and Pat Riley couldn’t go with Dwyane Wade…Somewhere along the line here and I don’t know how this happened, and I don’t know why it happened, but somewhere along the line there’s a trust fracture here,” said Le Batard.

Then later in the day, Ethan Skolnick from the Miami Herald went on to a local Cleveland radio station to address the possibility of Wade teaming up LeBron James once again:

.@EthanJSkolnick on D-Wade possibility to Cleveland: "If LeBron wants it done, it will get done, for sure" #Cavs

James wanting to make it happen may depend on the Cleveland Cavaliers’ cap flexibility. Currently they can offer Wade a $3.5 million mid-level exception, but obviously, that wouldn’t be attractive to him because of his current pay demands. There are trades Cleveland could make to free up cap space or James could simply take a pay cut. However, the notion of James taking the league’s veteran minimum to bring Wade in was ruled out by Skolnick.

According to sources close to situation, LeBron James is not actively recruiting Dwyane Wade and will NOT take the league minimum.

We will have to wait and see how the Nuggets meeting goes tomorrow but Wade has made it clear he will be looking at all of his options: Nuggets, Bulls, Cavs, and the Heat as well, hopefully.
[xyz-ihs snippet=”Responsive-ImagenText”]