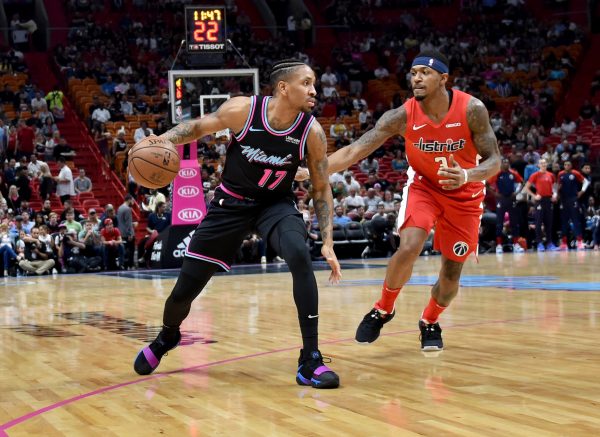 The Miami Heat’s effort to build a playoff-contending squad has thus far had mixed results with a 22-23 record this season.

One new report indicates that the team is continuing to look for ways to thin its roster as the Feb. 7 trade deadline approaches.

Barry Jackson of the Miami Herald looked at the Heat’s predicament and noted that Rodney McGruder might be the most likely candidate to be moved:

“The Heat has been active in exploring possible moves to thin its roster, a league source said this week.

“That official said he would expect an inquiry by a contender such as Boston that’s in need of a glue-type role player like McGruder. The Heat is over the projected $132 million luxury tax threshold for next season, and re-signing McGruder would raise that tax bill.

“Though the Heat would get little back in return for McGruder (perhaps a conditional second-round pick), dealing him would lessen the rotation logjam and reduce the Heat’s $9.7 million tax bill.”

In the case of Johnson and Whiteside, their contracts serve as the key reason why both are still members of the Heat. Johnson is making $19.2 million this year and has a player option for that amount next season, a steep price for a player who’s averaging 11.1 points per game. Whiteside’s inconsistent play has made other teams leery of taking on his contract of $24.4 million for this year and $27.1 million for the 2019-20 campaign.

One possible trading partner that was mentioned by Jackson is the Memphis Grizzlies, who are reportedly shopping center Marc Gasol and guard Mike Conley:

“Gasol’s contract has a $25.6 million player option next season, the final year of the deal. The New York Times’ Marc Stein reported the Grizzlies want a team trading for Gasol or Conley to take Chandler Parsons’ contract, which pays him $24.1 million this season and $25.1 million next season.

“The Heat easily could send similar salaries back to Memphis (about $50 million) for Gasol and Parsons and could try to dump contracts that extend beyond next season (James Johnson, (Kelly) Olynyk or Waiters). But it’s highly questionable if Memphis would have interest in that.”

The possibility exists that little or no activity will take place in the next few weeks. While the Heat front office looks at all different sorts of options, the team has more immediate concerns that are focused on hosting the Los Angeles Clippers on Wednesday night. Miami hopes to get out of a rut that’s seen it lose three of its last four contests.
[xyz-ihs snippet=”HN-300×250-TextnImage”]