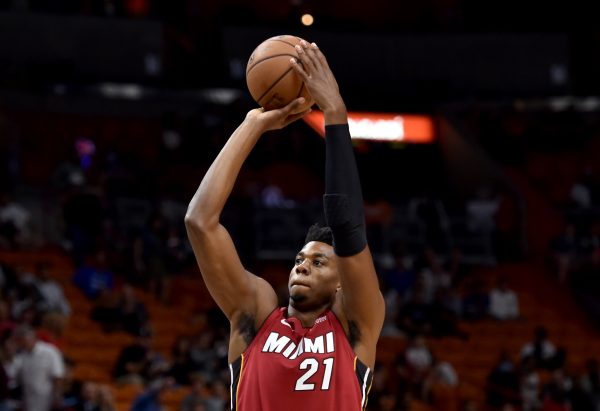 On the heels of yet another display of immaturity by Miami Heat big man Hassan Whiteside, it has been reported by Sam Amico of AmicoHoops.net that the South Florida club is looking to trade the mercurial center:

“The Miami Heat continue to look for a taker for center Hassan Whiteside but are having no luck so far, leagues sources told Amico Hoops.”

This is the latest report in a string of rumors over the last several seasons regarding Miami’s desire to part ways with the talented but troubled 7-footer. As has been the case in the past, Whiteside’s contract is the largest roadblock that the Heat have come across when it comes to parting ways with Whiteside.

“The biggest problem with Whiteside, according to opposing executives, remains his contract,” Amico wrote. “He is making more than $24 million this season and is due $27 million next year.

“That’s an albatross of a deal for a 7-footer, even one who has plenty of talent and is averaging 13.5 points and 13.7 rebounds. But in a league that remains fixated on ‘small ball’ and perimeter shooting, big men who are glued to the low post are having trouble being a fit — particularly late in games.”

Still according to an NBA executive, the Heat could potentially have the ability to move Whiteside before the trade deadline.

“One opposing executive said it ‘wouldn’t be impossible’ to move Whiteside before the February trade deadline, ‘just difficult,’” Amico wrote.

“The exec said the Heat may have to throw in a draft pick or find a third team, ‘but in this league, anyone can get traded if you’re determined enough.’”

The latest outburst from Whiteside came in Miami’s loss to the Orlando Magic on Wednesday night. With about 40 seconds remaining in the game, Whiteside got up from off of the bench and headed towards the locker room.

Considering his propensity to act out and his massive contract, it is unclear whether or not the Heat will find a willing trade partner for Whiteside. While his season averages are certainly impressive, there will likely be few suitors.

In the end, the unnamed NBA executive may be right. It may simply come down to Miami’s determination.
[xyz-ihs snippet=”HN-300×250-TextnImage”]