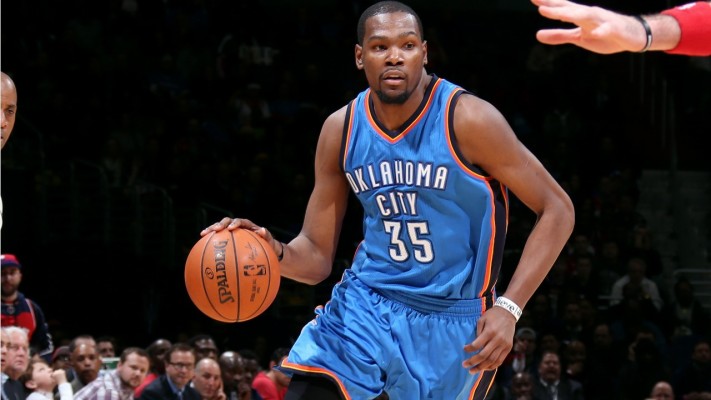 The Miami Heat are not giving up on the idea of Kevin Durant coming to South Beach in 2016.

Durant will undoubtedly be the biggest free agent on the market during the summer of 2016. As he plays out the final year of his contract with the Oklahoma City Thunder, there has been loads of speculation as to which team he’ll sign with next summer. Despite huge contract commitments to Chris Bosh and Goran Dragic, combined with the impending free agency of key players such as Dwyane Wade and Hassan Whiteside, the Heat still plan to make a run at Durant.

Via Barry Jackson of The Miami Herald:

“One thing is clear: The Heat intend to make a long-shot bid to lure Durant, who sold his Miami condo earlier this year.

“For Miami to be able to make a competitive bid for Durant, the Heat would need to either pass on signing Whiteside; or trade McRoberts, somehow get Whiteside at something closer to $10 million for 2016-17 (that’s not happening), cajole Wade to take less than $10 million and fill out the roster with cheap labor. Even if Wade left, Miami likely couldn’t afford Durant if Whiteside commanded a starting salary at close to the max. The Heat could (wink-wink) promise Wade that it would take care of him with a bigger salary in 2017-18 (when the cap is projected to rise to $108 million) and in 2018-19 ($127 million projection).”

It would be pretty complicated just for the Heat to have a legit shot at signing Durant, but don’t think it’s impossible for one second considering Pat Riley calls the shots in Miami. Remember, this guy tried to lure LaMarcus Aldridge to Miami with the mid-level exception after signing Wade and Dragic to big deals in the first few days of free agency this past summer.

If Durant really wants to sign with Miami, it’ll ultimately come down to sacrifice. Does Wade want to sacrifice more money for a tremendous shot at another championship? Will Whiteside really turn down his first, and likely best shot at big money by signing with the Heat for just $10 million in 2016-17?

Or do the Heat just allow both players to walk so they can sign a 27-year-old Durant in the thick of his prime?

These are all decisions Riley will have to make come July of next year.
[xyz-ihs snippet=”Responsive-Ad”]