Report: Miami Heat Telling Dion Waiters and James Johnson Their Playing Time Could Be in Jeopardy 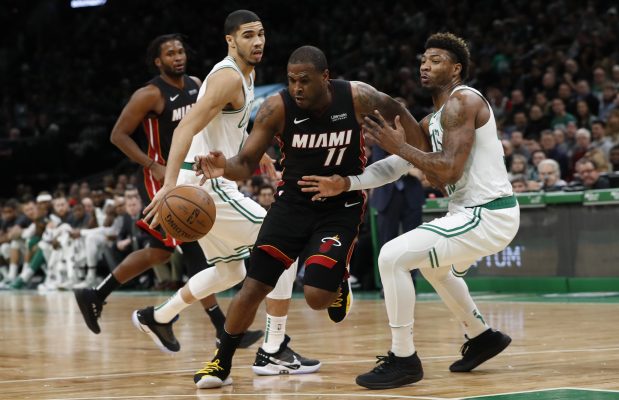 When the Miami Heat arrive for the team’s training camp in September, the expectation is that both Dion Waiters and James Johnson will be in prime physical shape. That’s because both players have been told that unless they’re in better shape, there will be no guarantees regarding their playing time.

Both Waiters and Johnson were coming back from injury this past season, with Waiters having undergone season-ending surgery in January 2018 and Johnson having offseason surgery last May. Both were expected to be ready for the start of the 2018-19 campaign, but setbacks along the way delayed both of their returns.

The 32-year-old Johnson was the first to return after missing the first 15 games. However, he only played in 55 contests and saw his statistical averages drop to 7.8 points and 3.2 rebounds per game. Those numbers weren’t what the Heat expected when they signed him to a four-year, $60 million contract extension in July 2017.

Waiters’ physical appearance when he arrived for training camp drew attention and those setbacks in his rehabilitation delayed his return until Jan. 2. Missing the Heat’s first 35 games limited him to just 44 during the season, the third year in a row that the 27-year-old veteran has failed to play in at least 50 games.

All three of those seasons have come in a Heat uniform and Waiters’ performance once he returned this past season saw declines in his scoring and assist averages. He averaged 12.0 points and 2.8 assists while maintaining the same 2.6 rebounding average as the year before.

The Heat also have other players whose statuses are uncertain for next season as they seek to take steps toward competing for an NBA title. Recent seasons have limited their ability to reshape the team’s roster, a task that will become easier next season when some major contracts come off the team’s steep payroll.
[xyz-ihs snippet=”HN-300×250-TextnImage”]