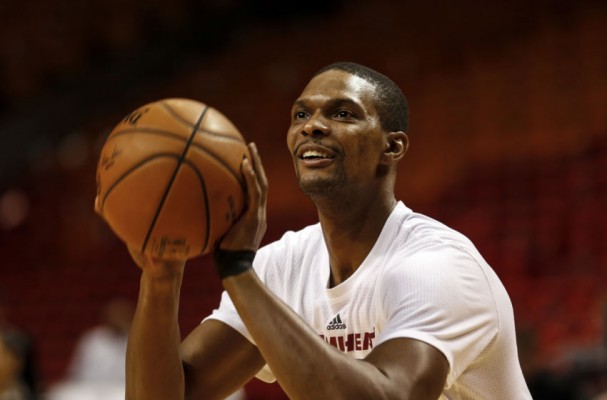 While forward Chris Bosh technically remains a member of the Miami Heat, there are no plans to have him take the court due to a third blood-clotting episode and failed physical last September. Bosh’s status remains in limbo, with the expectation being that the Heat will release him during the offseason.

According to Barry Jackson of the Miami Herald the Heat has delayed Bosh’s inevitable release and removing him from its salary cap for two reasons:

“Miami doesn’t need the roster spot just yet, and none of the recent available free agents held great appeal to the Heat.

“More importantly, Miami want to keep alive the not-very-likely possibility of being able to trade Bosh (after the season) to a team that might want to trade something Miami wants or a team that believes he could play or (as was the case before last month’s trade deadline) a team that needed to get to the cap floor. There were preliminary trade inquiries earlier this season.”

At the start of the season, Bosh’s contract dictated that he was still owed $76 million over three seasons. Slightly more than half of that amount ($40.95 million) would be covered by insurance, with the remaining amount paid out by the Heat, unless they can find a trade partner, information pointed out by Bobby Marks of The Vertical.

Besides the health issue, NBA rules prevent a team trading for Bosh to remove his salary from its particular cap. Those two issues have served as the major roadblocks when it comes to uncovering a team that wants to deal for the veteran.

Due to their lack of options in this area, Miami is expected, after the season, to have a doctor chosen by the league and union to rule that Bosh’s condition is career-threatening or severe enough to put him at risk if he plays.

If the doctor rules in Miami’s favor, that would remove just over $52 million of Bosh’s salary from the team’s cap over the next two seasons: $25.3 million for 2017-18 and $26.8 the following year.
[xyz-ihs snippet=”Responsive-ImagenText”]