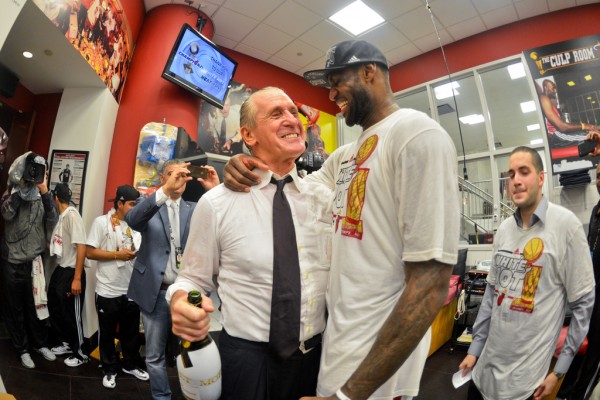 LeBron James has attracted drama throughout his career. While there is more than enough controversy surrounding his current team at the moment, one ESPN insider let fans in on the kind of issues James might have created on his way out from the Miami Heat.

On Tuesday, ESPN radio show host Dan Le Batard discussed a belief within the Heat organization that James actively tried to sabotage potential Miami signings in the summer of 2014, when he decided to sign with Cleveland.

“Here’s the other thing that the Miami Heat believe: that when LeBron decided to get out of here, he was actively playing defense against their ability to get anybody,” Le Batard said. “They thought they had Pau Gasol locked up and then LeBron got some texts to Pau Gasol and next thing you know Pau Gasol is going somewhere else. The Miami Heat thought he was actively playing defense because he wanted to leave the organization worse than he found it. That was a belief of the Miami Heat that LeBron James was trying to harm the Miami Heat and in this particular case, it’s what you’re talking about, taking away the Nets pick from them.”

James has recently indicated that he wants the Cleveland Cavaliers to improve their roster to try to compete for another NBA championship this season. Given their recent lack of success, that kind of improvement would likely force the Cavs to part ways with valuable future assets. While that may help them win in the short term, it would certainly hurt them in the long run.

There is no denying that James is one of the best basketball players in the world, but it seems that kind of talent comes with a high level of baggage.

The Heat have finally managed to rebound from any kind of sabotage that James may have attempted. It will be interesting to see how the Cavs handle his departure if James decides to sign with another team by the time the 2018 NBA offseason rolls around.
[xyz-ihs snippet=”HN-300×250-TextnImage”]