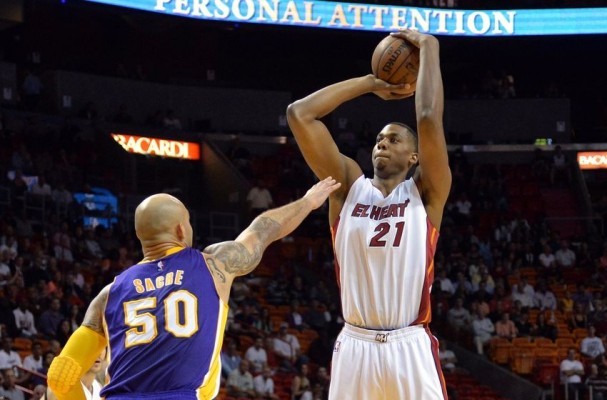 It’s no secret that the Hassan Whiteside and Miami Heat marriage may be coming to an end soon.

According to Kevin Pelton of ESPN.com, the Los Angeles Lakers may be looking to trade for Whiteside before the trade deadline. Via Pelton:

Trading players or picks for him would only make sense to prevent the Miami Heat from trading him elsewhere at the deadline.”

The Lakers are in desperate need of a legitimate post presence. They are currently relying on Roy Hibbert and Larry Nance Jr. as the starters in the frontcourt, and needless to say, it’s not getting the job done. The Lakers rank 19th in rebounds per game and 28th in points allowed.

Whiteside is due to become a free agent this year, and unless something changes, it’s going to be financially impossible for the team to re-sign Whiteside. If the Heat choose to re-sign Dwyane Wade to an annual salary anywhere near the $20 million he’s earning this year, the team won’t be able to offer the max contract Whiteside will likely garner in the free agency market.

If Miami parts ways with Whiteside before the trade deadline, they can get some draft picks and more importantly, a shooter such as Lou Williams to improve their dreadful three-point shooting.

With the Heat barely hanging on for a playoff spot at the midway point of the season, Pat Riley may have to shake up the roster once again if the team has any chance of competing for a championship in 2016.
[xyz-ihs snippet=”Responsive-Ad”]