Report: LeBron James ‘Very Interested’ in Going Back to Miami 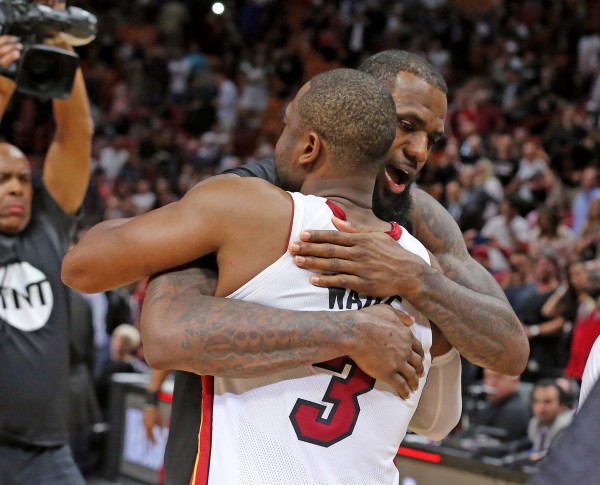 During the four years that LeBron James was a member of the Miami Heat, the team reached the NBA Finals each year and captured two of the franchise’s three titles by winning championships in 2012 and 2013. Having played for his original team, the Cleveland Cavaliers, the past four years, James is once again expected to enter the free agent marketplace in July and according to Fox Sports commentator Skip Bayless, he could once again don a Heat uniform next season.

"I have a source very close to Dwyane Wade and very close to Pat Riley who continues to tell me they believe LeBron will be very interested in going back to Miami next year." — @RealSkipBayless pic.twitter.com/9MCYtsrH3R

James and his close friend Dwyane Wade reunited as teammates with the Cavaliers for a little over four months before Wade was dealt to the Heat on Feb. 8. Their tight bond serves as a key reason why such speculation may continue to flourish.

The relationship between James and Pat Riley is much more problematic, with Riley’s biting comments prior to James’ 2014 departure back to Cleveland being something that James likely hasn’t forgotten. In addition, James would no doubt expect the same sort of financial commitment toward building a championship-level squad from Heat owner Micky Arison that Cavaliers owner Dan Gilbert has made over the past four seasons. At present, there’s no indication that such a commitment is forthcoming.

Even though James will turn 34 during next season, he’s still performing at an MVP-type level, averaging a triple-double during the month of February and scoring 41 points in a Cavaliers win on Wednesday night. A James reunion with the Heat would immediately vault the team into championship contention, but his ultimate destination will remain unknown for at least the next three months.
[xyz-ihs snippet=”HN-300×250-TextnImage”]