Report: LeBron James to Sit Down With Miami Heat During Free Agency 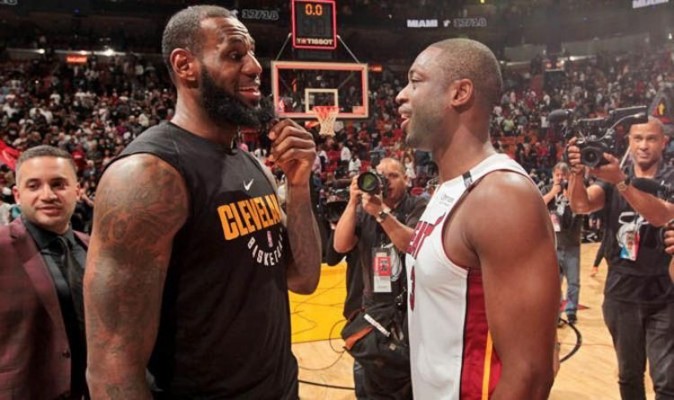 With the NBA free-agency period now just weeks away, teams are jockeying for position with respect to the top players available to sign. At the top of the list, or at least right near that spot, is former Miami Heat star LeBron James, with one report suggesting that he’ll consider a return engagement with the team.

ESPN’s Stephen A. Smith tweeted that the Heat are among seven teams in the running for the services of the 15-year veteran who continues to play at an elite level.

These are the 7 teams in the mix for LeBron James. pic.twitter.com/XfqwUKTwBI

While some may scoff at the bombastic Smith’s claim, Barry Jackson of the Miami Herald notes that Smith was the first person to indicate that James was giving the Heat strong consideration in 2010. After signing with Miami, James helped lead the franchise to four consecutive finals appearances and a pair of titles in 2012 and 2013.

Right now, the most popular predictions for James’ destination have been the Los Angeles Lakers and Houston Rockets, with his current team, the Cleveland Cavaliers also strongly in the mix.

Jackson explained part of the reason why the Heat are not among those favored to snag James:

“James stands to make about $35 million next season whether he opts out or not.

“The Heat, in such a scenario, would need to send comparable salary to Cleveland, with Hassan Whiteside and Josh Richardson and draft picks one permutation that would work within parameters of the salary cap – though that deal would obviously not approach equal value for the Cavaliers.

“If the Cavaliers refused to execute a sign-and-trade and James wanted to return to South Florida, the Heat somehow would need to clear out about $55 million in cap space, while taking nothing back except cash and draft choices, in order to create the salary cap room to give James a max contract.”

After the Cavaliers were swept by the Golden State Warriors in the NBA Finals on Friday night, James spoke about how this free-agency period will be much easier in comparison to his controversial “Decision” to leave the Cavaliers in 2010:

Despite the intense criticism he received from those outside Miami for that decision, James spoke of how he was able to benefit from making the choice and how it ties into this year’s decision:

“To be able to play with talented players, cerebral players that can see things to happen before they happen on the floor,” James said.”When you feel like you’re really good at your craft, it’s always good to be around other great minds as well. That’s never changed.”

James also indicated that the roster chaos and injury problems that the Cavaliers dealt with this season weren’t around during that first year with the Heat:

“The difference between this season and my first season in Miami was we didn’t have many injuries at all,” James said. “Myself, D-Wade (Dwyane Wade), [Chris] Bosh, UD (Udonis Haslem), Mike Miller had a few injuries. [Mario] Chalmers was available. We were pretty solid as far as not being injury-prone.”

While the Heat management will make the requisite effort to recruit James again, most likely led by his close friend Wade, the team’s current status doesn’t quite fit the veteran’s parameters. That would be a team that’s built to immediately challenge for an NBA title, with the salary cap considerations and other factors involved currently working against Miami.
[xyz-ihs snippet=”HN-300×250-TextnImage”]