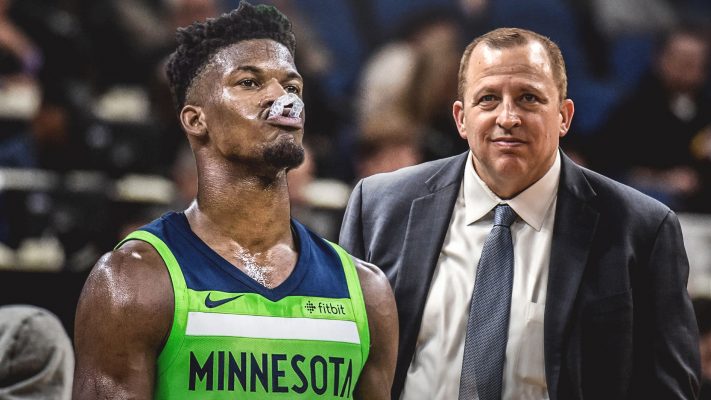 Jimmy Butler, upon his return to Minnesota, doubled down on his trade request while meeting with Minnesota Timberwolves head coach Tom Thibodeau.

He confirmed again to Thibodeau his eagerness to leave Minnesota and pursue a new future with another organization.

Jimmy Butler has returned to Minnesota and reiterated his trade desire in a meeting with president/coach Tom Thibodeau on Monday, league sources tell me and @JonKrawczynski.

As expected, the All-Star remains steadfast in his readiness to leave Thibodeau, the Timberwolves and his past behind. Butler and Thibodeau worked together while in the Chicago Bulls organization before meeting up again in Minnesota.

The Houston, Texas native previously mentioned his desire to be traded to a handful of teams, and the Miami Heat topped that list. Drafted as the 30th pick in the 2011 draft by the Bulls, the Marquette University star has become a top player in the league.

Last year, the 29-year-old veteran averaged 22.2 points, 4.9 assists and 5.3 rebounds per game. With his help, the Timberwolves were able to secure the final playoff spot in the Western Conference, but were bounced by the Houston Rockets after five games. If Thibodeau and the Timberwolves don’t make a deal, then Butler would again be a vital piece to the Timberwolves’ playoff aspirations.

Even though Butler has returned to Minnesota, a trade could still be looming on the horizon as the Timberwolves and Heat continue soft discussions. Expect for these fluid trade talks to swing back and forth as the season nears and teams ratchet up their preparations for the regular season.
[xyz-ihs snippet=”HN-300×250-TextnImage”]