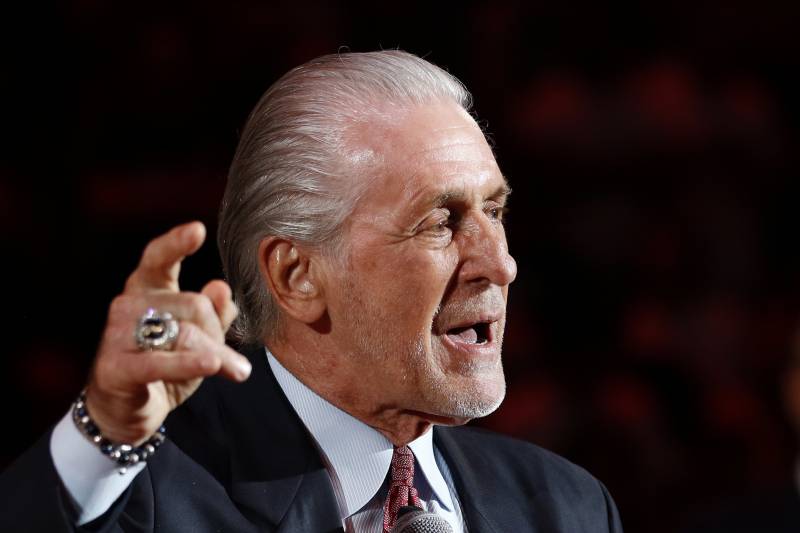 The Los Angeles Lakers just experienced what was quite possibly the most embarrassing season in their organization’s history, and now it appears that team owner Jeanie Buss wants to make up for it by making a serious offseason splash.

According to Stephen A. Smith, that splash may be bringing Miami Heat president Pat Riley back to L.A.

“From what I’m being told and I’m sure you heard this, Jeanie Buss is hell bent on making a big splash,” Smith said on ESPN’s “Pardon the Interruption.” “And the name that I’m hearing is Pat Riley. I don’t think that will happen, but I think everybody needs to know Jeanie Buss is hell bent on making a splash. Supposedly that’s what she’s been telling a lot of people. And more, and more, and more over the last few days, correct me if I’m wrong, we are hearing Pat Riley.”

PTI’s Michael Wilbon then asked a question that all fans should be wondering regarding any chance that Riley does actually consider a move.

“Let me go to another piece which you know is important,” he said. “Are he and LeBron [James] okay? Are they okay enough to put everything that might have been three, four, five years ago aside and pursue this?”

While Riley has certainly changed his tune on his relationship with James over the last few years, there is no doubt that working together once again is a very different task than merely burying the hatchet.

At the moment, it’s hard to decipher how likely Riley leaving South Beach actually is. It’s hard to imagine actually happening, but all NBA fans know that the offseason is filled with non-stop drama.

Still, it is hard to ignore the facts that the Lakers hold an important place in Riley’s heart. Not only did he win his first NBA championship as a player with the Lakers, he also won four out of his five championships as a coach in L.A. His fifth coaching championship of course came in 2006 with the Heat.

Hopefully, the upcoming offseason drama that is just around the corner does not include Riley heading west.
[xyz-ihs snippet=”Hn-Responsive-EOA”]