Don't Miss
Home / Rumors / Report: Those Close to Goran Dragic Say He Will Likely Opt in to Final Year of Miami Heat Contract

Report: Those Close to Goran Dragic Say He Will Likely Opt in to Final Year of Miami Heat Contract 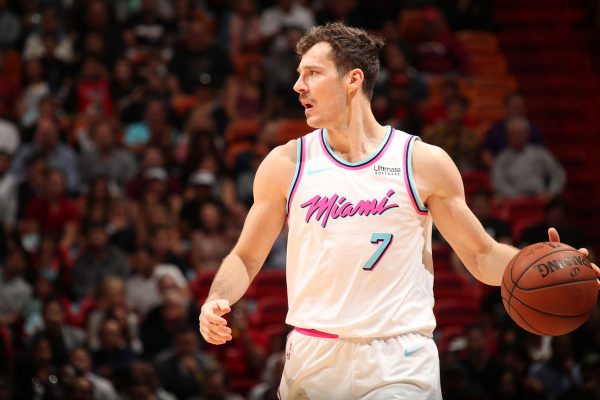 One of the contract concerns that the Miami Heat have this offseason is whether veteran guard Goran Dragic will be opting in to the final year of his contract.

A new report indicates that unless some unexpected information causes Dragic to think twice about his decision, he’ll return for another year with the Heat.

Barry Jackson of the Miami Herald looked at how Dragic’s enjoyment in playing for the Heat is the chief reason he’ll stay, but indicated that potentially more lucrative opportunities may change his mind:

“An associate of Dragic said he would be very surprised if Dragic does not opt into the final year of his Heat contract but said it ultimately comes down to this:

“Dragic very much likes playing for the Heat and it’s a good situation for him. The question is whether an incredible different situation should present itself before his June 29 opt-out date.

“That could mean a championship contender or another appealing team hinting to him or his associates, through back-channels, that he should opt out and that a rich multiyear contract awaits. Though players under contract cannot talk to other teams before July 1, it’s common for messages to be discreetly delivered in general terms.”

The 33-year-old Dragic will make $19.2 million for the 2019-20 campaign, the last season of a five-year, $85 million deal that he signed in July 2015. That deal was reached five months after the veteran had been acquired by the Heat from the Phoenix Suns.

When it comes to possible offers, that likelihood may be diminished, given Dragic’s age and the fact that he missed more than half of the 2018-19 season, playing in just 36 contests. He underwent knee surgery in December and didn’t return until after the All-Star break.

In those 36 games, Dragic averaged 13.7 points, 3.1 rebounds and 4.8 assists per game, numbers that were down from each of the past season, though his assists average matched his 2017-18 effort.

Should he return, Dragic would provide the Heat with veteran leadership next season, a commodity that they’ll need with the departure of retired legend Dwyane Wade.
[xyz-ihs snippet=”HN-300×250-TextnImage”]