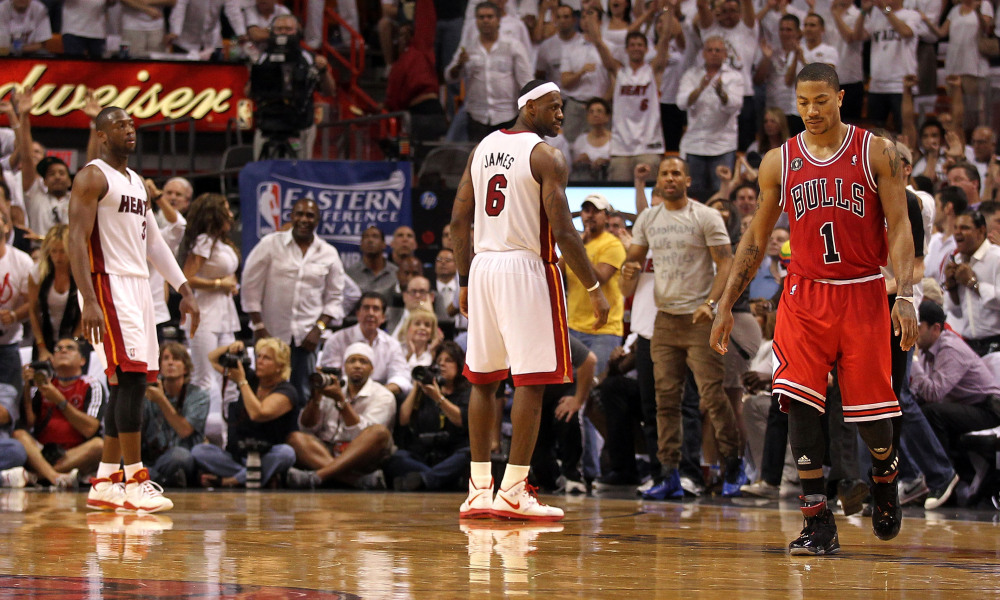 Derrick Rose may have inadvertently been responsible for the formation of the Miami Heat’s former Big 3, which included LeBron James, Dwyane Wade and Chris Bosh.

During the summer of 2010, James, Wade and Bosh were among the top free agents being recruited by several teams. James was the grand prize of the free-agency period and the Chicago Bulls wanted to make a pitch to the multi-talented forward.

According to NBA trainer Rob McClanaghan, who appeared as a guest on ESPN insider Adrian Wojnarowski’s “The Woj Pod,” Rose refused to join Bulls brass in its recruitment efforts for James.

“What was that all about?” McClanaghan asked Rose who had just spoken to a member of the Bulls management team.

“They want me to go help recruit LeBron,” Rose replied.

When McClanaghan asked Rose if he was going with the front office, the Bulls guard was adamant that he wasn’t going to fly with them to meet with James.

McClanaghan explained that Rose wanted to play with James but recruiting the reigning MVP at the time was out of the question.

“He just didn’t want to do it,” McClanaghan reiterated. “Management obviously did want him to do it and Derrick refused to go, and ended up not going.”

Obviously, it’s not entirely Rose’s fault that James declined Chicago’s offer and decided to join the Heat instead. But one can only wonder what fate had in store for the Bulls had Rose been a part of the recruitment team.

“That’s just the way it is and that’s the way Derrick is, and I was with him,” McClanaghan said.

In fairness to Rose, he eventually revealed, in October 2017 during a shootaround in Cleveland, that he did his part to recruit the trio of James, Wade and Bosh.

“People always said I didn’t recruit,” Rose said. “I tried to recruit. I put out a video. But it wasn’t for me to say that. I felt like the organization was supposed to say that. And they didn’t.

“I don’t know if (Wade, LeBron, Bosh) looked at it or played the video. But I made a video.”

Unfortunately for Rose, it was the Heat that eliminated his Bulls in the Eastern Conference Finals in the 2011 playoffs and advanced to the Finals that year.