Report: Blake Griffin Prefers to Be Traded to Heat, Knicks, Mavericks or Nuggets 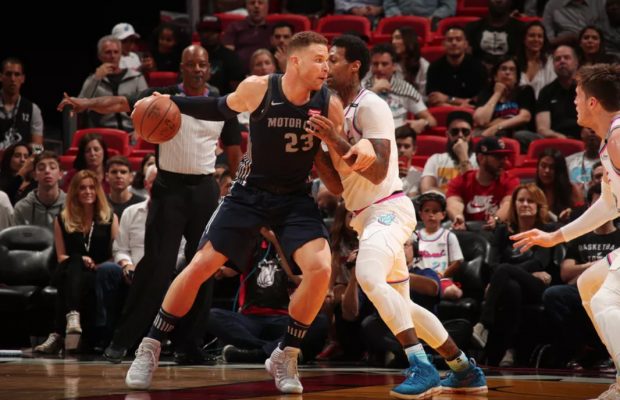 The Miami Heat are looking to get involved in the warming trade market before the Feb. 7 deadline, and a star player they may want to consider targeting is Detroit Pistons power forward Blake Griffin.

According to a Monday report, Griffin is unhappy in Detroit and Miami could very likely be one of his preferred destinations along with the New York Knicks, Dallas Mavericks and Denver Nuggets.

Earlier this season, the Heat missed out on an opportunity to trade for All-Star small forward Jimmy Butler. Managing to trade for Griffin would certainly help fill the void that exists in Miami for a true superstar.

At the moment, Griffin is having one of the best statistical seasons of his career, averaging 26.5 points (career-high), 8.1 rebounds, and 5.2 assists per game. While the Heat undeniably have a stable of talented players who are able to get hot on a game-to-game basis, there is no one currently on the roster who can produce at that level night in and night out.

If the Heat were able to trade for Griffin without parting ways with members of their young and talented core, they could quickly become serious contenders in the Eastern Conference.
[xyz-ihs snippet=”HN-300×250-TextnImage”]

Blake GriffinFeaturedmiami heatNews Ticker
← Previous Story Report: Lakers Still Interested in Wayne Ellington, Expected to Pursue Him
Next Story → Report: Miami Heat Expected to Trade Away Players That Have Fallen Out of Rotation