Report: Pat Riley and Micky Arison Will Be Able to Watch Games in Disney Bubble Under Stringent New Rules 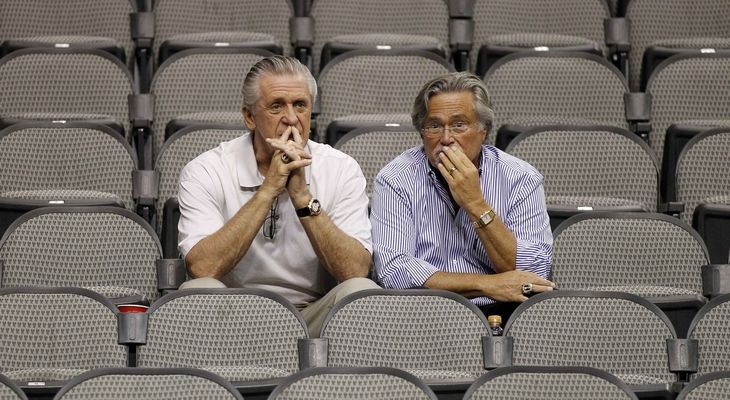 On Wednesday, the Miami Heat will be traveling to Orlando, Fla. for the conclusion of the 2019-20 NBA season.

While team president Pat Riley and franchise owner Micky Arison won’t be traveling with the team, they will be able to watch games in person under certain circumstances, per Barry Jackson and Anthony Chiang of the Miami Herald.

“NBA owners, such as the Heat’s Micky Arison, and team executives, such as Riley and [Andy] Elisburg, who are not residing in the Disney bubble are permitted to attend games,” Jackson and Chiang wrote. “But they must use separate entrances and exits in the arenas while remaining socially-distanced at least 25 feet from the court/players and coaches in the traveling party and wearing a mask at all times.”

The NBA suspended the 2019-20 regular season after Utah Jazz center Rudy Gobert tested positive for the novel coronavirus in March.

In the days following NBA commissioner Adam Silver’s decision to pause the season, several players from organizations across the league contracted the contagious virus as well.

As a result, Silver has been cautious in his efforts to minimize the spread of the virus once the season starts back up.

The Heat are currently the No. 4 seed in the Eastern Conference. The team is focused on winning a championship this season.

Featuredmiami heatmicky arisonNews Tickerpat riley
← Previous Story Report: Tyler Herro Watching Tape on Klay Thompson, Ray Allen to Improve as Shooter
Next Story → Report: ‘Not a Big Secret’ That Victor Oladipo and Miami Heat Have Mutual Interest in Each Other