NBA Rumors: Ray Allen To Sign With The Cleveland Cavaliers 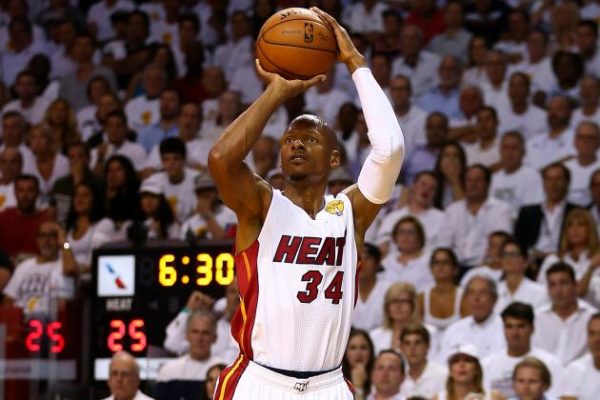 Ray Allen is taking his talents to the Cleveland Cavaliers.

After a dizzying offseason that saw LeBron James leave South Beach to return to his home state of Ohio, it looks like the Cavaliers have lured away another former Heat player—this time it’s the NBA’s greatest three-point shooter of all time, Allen.

According to Glenn Moore of FanSided, the Allen-to-Cleveland signing is a done deal. Moore stated the following on Twitter early Tuesday afternoon:

The rumored acquisition of the 39-year-old shooting guard would be the final piece of the puzzle for the championship-hopeful Cavaliers. This follows an offseason in which Cleveland signed former Heat players such as James Jones, Mike Miller and Shawn Marion to shape a rotation that will aid in LeBron’s quest to lead the Cavaliers to their first NBA Championship. Jones and Miller won two championships with the Heat in 2012 and 2013, while Marion played for Miami during the 2007-08 and 2008-09 seasons.

While Allen is no longer the player he was in his prime, he is one of the NBA’s best role players even at the ripe old age of 39. The UConn product will always be in Heat lore due to his game-tying three-pointer at the end of regulation in Game 6 of the 2013 NBA Finals versus the San Antonio Spurs. Miami would go on to not only win that game in overtime, but win the series in Game 7 for the franchise’s third NBA title.

Jesus Shuttlesworth played just two seasons with the Heat, but he helped lead the franchise to two consecutive Finals appearances after a successful five-season stint with the Boston Celtics, where he won an NBA title in 2008 as part of the league’s first modern “Big Three” with Kevin Garnett and Paul Pierce. Allen averaged 10.3 points per game while with the Heat, and shot over 37 percent from beyond the arc in each of those seasons.

Dwyane Wade summed it up best when he described the Cavs’ strategy for shaping their roster, via Ethan Skolnick on Twitter:

More Wade on Allen/Cavs prospect: “They’re taking what we did here & trying to duplicate it there. That means we did something right here.”

With five former Miami players in Cleveland, it would appear Wade’s statement has leverage. The impending Cavaliers-Heat rivalry has just been cranked up a notch with the defection of yet another ex-Heat piece.
[xyz-ihs snippet=”Responsive-Ad”]