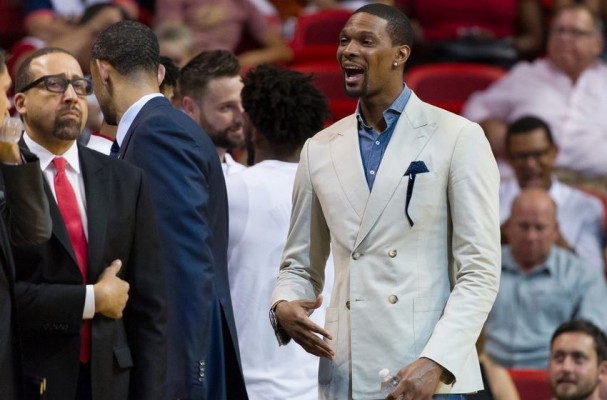 Chris Bosh‘s playing status has been a mystery since the NBA Playoffs began last season.

The Miami Heat big man has made it clear that he is healthy and ready to go, however, the Heat don’t seem ready to let him return to the court just yet. This ongoing, increasingly muddled situation is leading towards a standoff between Bosh and the team’s front office.

Now, in the latest turn of events, it looks like the NBA will get involved in the “dispute.”

“This is going to come to a head at some point,” a party familiar with the situation said of the league’s involvement.

Though the team maintains that its No. 1 concern is Bosh’s overall health, there are other financial factors at play here. Ira Winderman of the Sun Sentinel made an interesting point in his latest piece for the South Florida newspaper:

“A return by Bosh would have implications beyond his medical status, including an impact on the Heat’s salary cap and possible salary-cap relief.”

Could the team’s position on this debacle revolve around salary cap concerns? It certainly seems possible.

The 6’11” forward was recently seen working out with teammates and was also reportedly expected to be medically cleared by the start of the regular season. However, that optimism is now starting to waiver with the expected intervention of the NBA.

“I know I’ve been gone for a moment, but now I’m back,” Bosh said in a recent video post. “Everybody is always asking me am I hooping? Yes, I’m hooping. Absolutely. I’m a hooper.”

Despite Bosh’s obvious desire to return to the court, there is still no official word from the team’s head coach Erik Spoelstra or the front office on whether or not he will play in the team’s season opener.

At this point, it remains unclear what type of role the NBA would play in the ongoing saga of Bosh’s health concerns, his feud with the Heat and his subsequent playing status, but they are expected to step in and see if they can get this mess resolved.
[xyz-ihs snippet=”Responsive-ImagenText”]