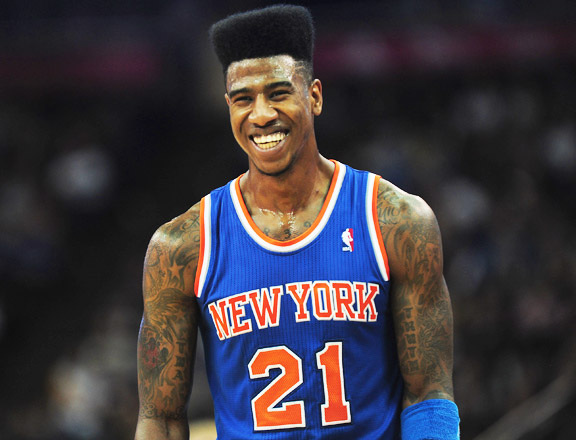 Reports have surfaced that Iman Shumpert, who has seemingly been on the trading block since the day he entered the league, is a piece that the Knicks are hoping to move in exchange for a first-round pick in Thursday’s NBA draft.

Well, it looks like the Heat may be poised to add a current Knicks swing man to their roster this summer, and I’m not talking about Carmelo Anthony.

You may remember hearing his name thrown around last season at the trade deadline, but in the end Shumpert stayed put in New York and finished the season as a Knick.

Perhaps it’s just an attempt to grab some solid depth in a very skilled draft class, but it could also be a sign of a culture change that’s coming in New York. With Phil Jackson and Derek Fisher hoping to put their fingerprints on a new Knicks blueprint for success, they may be looking to find pieces that they feel best fit their system.

It makes sense for Miami because Shumpert is still very young at just 23 years old, but he also has NBA experience. With LeBron James, Dwyane Wade and Chris Bosh all having a decision to make about where to play next season, a promising kid with the experience of Shumpert could be a step towards keeping the Big 3 together.

Re: @ESPNSteinLine report of NYK exploring Shump for 1st-round pick: Watch the Heat, potentially using No. 26 as main bait for Shumpert.

We all saw Mario Chalmers struggle throughout the finals, and the Heat need another scoring threat at the guard position, something Shumpert can provide. While he’s only averaged 7.7 points and 3.5 rebounds throughout his career, he is a guy who could benefit from a new and more pass-friendly Miami Heat system.

Miami currently holds the 26th pick in the first round, and it’s hard to imagine the Knicks getting a much better offer for Shumpert than #26. Oklahoma City and the LA Clippers have also been rumored to have interest in acquiring Shumpert, who has one year left on his rookie contract.

If the Heat can pull off a trade to bring Iman down to Miami, it could help keep the core of the team together for at least one more season. It would be a solid addition, but Pat Riley understands that this is only the beginning of a critical summer for the Heat.