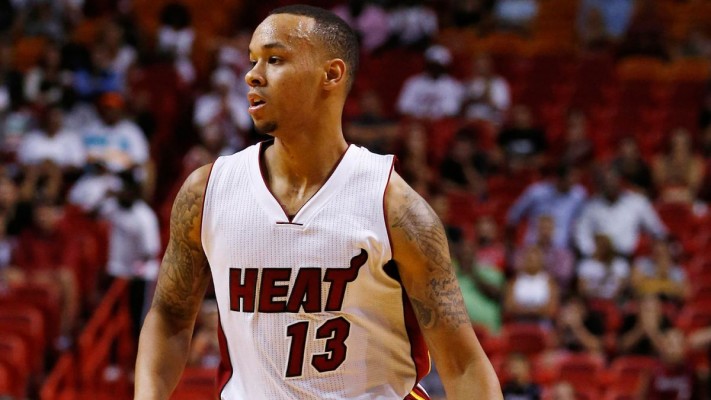 The Miami Heat have made it clear in recent talks that several players are available through trade. It would appear that reserve point guard Shabazz Napier has now joined that list.

Zach Lowe of ESPN’s Grantland has said that the Heat have put out “feelers” about trading the 23-year-old point guard.

Over the last few weeks, it was reported that Mario Chalmers and Chris Andersen are on the trade block. Rumors have also swirled that Josh McRoberts is available through trade. While all three of those players make sense considering they’re veterans and are all due to earn at least $4.3 million for next season, Napier is a bit surprising considering he has yet to even enter his second season. He also has a low cap figure for next season, as he’s due to earn a little under $1.3 million for the 2015-16 season.

It is true that the Heat will start Goran Dragic next season, which means Napier will no longer be the point guard of the future for the franchise. However, that doesn’t mean the University of Connecticut alum can’t be valuable in a bench role.

During his rookie season, Napier averaged 5.1 points, 2.5 assists and 2.2 rebounds in 51 games and 10 starts. While he had a nice stretch in November when he scored in double digits for six consecutive games, the young point guard had the definition of an up-and-down season. On two separate occasions he was sent down to the D-League.

It remains to be seen who will be traded from the Heat, but it will come as no shock if one of the Heat’s holdovers from last season are no longer on the team by the end of July.
[xyz-ihs snippet=”Responsive-Ad”]