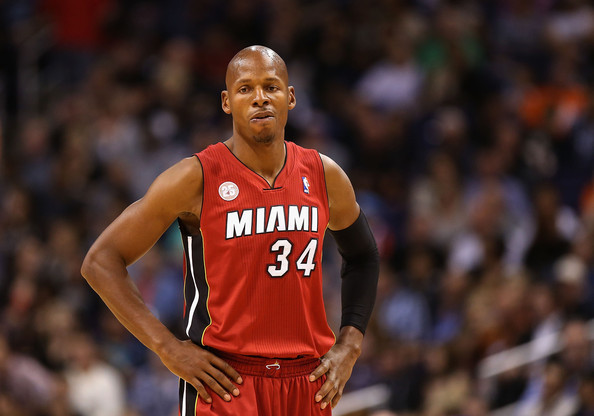 The Miami Heat may be seven games below .500, but that doesn’t mean they’re shying away from the Ray Allen sweepstakes.

Allen—a member of the Heat during the 2012-13 and 2013-14 seasons—is expected to make a decision regarding whether or not he will return to the NBA following the All-Star break. The 18-year veteran is currently a free agent and has not played a single game since the Heat fell to the San Antonio Spurs during the 2014 NBA Finals last June.

Teams led to believe Ray Allen to decide where he’ll play in next 10 days. Allen concerned with Cavs when LeBron visited, but not anymore.

Despite having not played in nearly a year, Allen has stayed in shape by doing on-court work to keep the possibility of returning open. In his two seasons with Miami, Allen helped bring a championship (2013) to the Heat while averaging 10.3 points per game on 40 percent shooting from three-point range.

While the Heat are interested in bringing back the three-point sharp shooter, several other teams remain interested in the veteran shooting guard—teams such as the Washington Wizards, Cleveland Cavaliers, Golden State Warriors, San Antonio Spurs and Atlanta Hawks.

Unlike Miami, all five of those aforementioned teams are considered legit championship contenders this season. It’s safe to assume that Allen’s main priority is to play for a championship-contending team. While his ties to the Heat are still fresh, there is little doubt that Miami is not the team that it was during Allen’s two-year stint with the franchise.

Marcus Thompson of The San Jose Mercury News reports that the Warriors will continue to leave a roster spot open until Allen makes a decision on whether he’ll return to the NBA or retire.

Another story line to watch is the effect LeBron James has on the shooting guard’s decision. James and Allen were teammates over the last two seasons, and it was reported that while “The King” was recovering from injury over a two-week period in January, he was down in Miami to meet with his former teammate about signing with Cleveland.

Regardless of what Allen’s decision ends up being, there will be much anticipation surrounding the 18-year veteran’s announcement over the coming days.
[xyz-ihs snippet=”Responsive-Ad”]