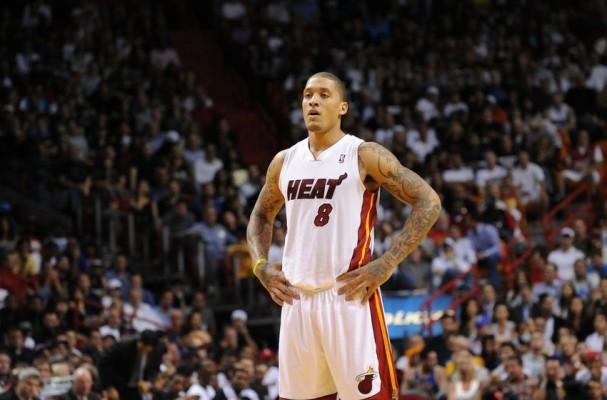 The Miami Heat recently jettisoned several players over the last few days as they cleared up a few roster spots in the process.

The Heat currently have 15 players on the roster, and they are allowed to have up to 20 players during training camp. While Miami’s roster looks pretty set, there could be a familiar face back in the picture.

Ira Winderman of The Sun Sentinel reports that Michael Beasley could return to the Heat during training camp on a non-guaranteed contract. Winderman stated the following in response to a reader’s question on whether or not the organization should bring back Beasley:

“As for Beasley, I wouldn’t rule it out. The Heat simply were not in a position to guarantee his 2015-16 salary by the end of June, just as the Heat might have to bypass some guarantees at the Aug. 1 deadline. If Beasley is willing to come in without a guarantee, I think there still could be an opportunity there. Based on his Instagram account, Michael clearly is trying to work his way back to an NBA return.”

With Zoran Dragic, Henry Walker and Shabazz Napier off the roster, the Heat could use a player such as Beasley for training camp. If he’s brought in on a non-guaranteed contract, Miami won’t have anything to lose.

While the No. 2 overall pick is no franchise player, he has shown the ability to be a quality scoring option while playing sizable minutes. Signed as a free agent midway through last season, Beasley averaged 8.8 points in 21 minutes per game for Miami.

Considering there have been no reported suitors for Beasley’s services, the Heat can sign him on a cheap, low-risk deal. His familiarity with Erik Spoelstra and the organization would only make things easier.

Though it may not be immediate as training camp doesn’t begin for another two months, don’t be shocked if B-EZ is back in a Heat jersey.
[xyz-ihs snippet=”Responsive-Ad”]