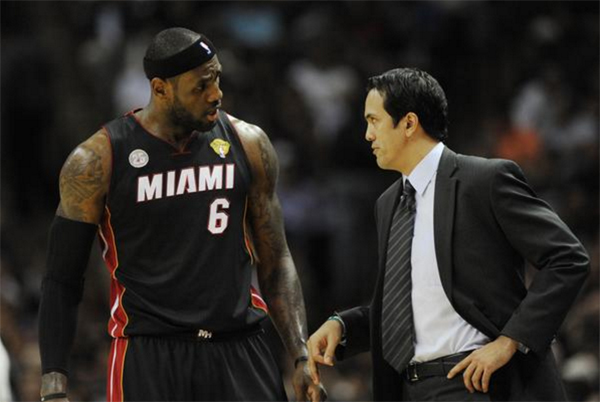 Ever since David Blatt was fired from the Cleveland Cavaliers late last week, one of the culprits named has been none other than LeBron James.

While there is no evidence that indicates that James played a role in Blatt’s firing, it hasn’t stopped reports and speculation about how the four-time MVP wanted the head coach fired.

Now adding fuel to the fire is this newest report from David Pick of Bleacher Report. Pick appeared on an Israeli sports talk radio show along with Miami Heat minority owner Raanan Katz on Tuesday evening. During the show, Katz revealed that James “made it clear” he wanted head coach Erik Spoelstra fired during his four seasons with the Heat.

Here is what Kaatz said during the show in regards to why James left Miami for Cleveland:

“With the Miami Heat, LeBron James—before and after his four seasons when his contract was up with the team—made it clear that he wanted to dump head coach Erik Spoelstra. At one point, Pat Riley called LeBron into his office and said that no one will tell him how to run the organization. Riley told James that Spoelstra is his guy and that firing Spoelstra is out of the question. That was the main reason LeBron returned to Cleveland.”

Kaatz didn’t stop there, as he also commented on the topic of James influencing Miami’s front-office decisions:

“LeBron screwed us badly; we weren’t prepared for his departure from the Miami Heat. We made the wrong decisions because of LeBron James—he told us to draft a point guard (Shabazz Napier) who didn’t meet the expectations, but we chose him because that’s what LeBron wanted.”

There is no doubt that this is huge news. While James left the Heat a year-and-a-half ago, the wounds are still fresh as the franchise continues to move into a new era.

This bit of new information gives a little bit of background as to why LBJ left the Heat despite having so much success during his four seasons in Miami. It also perhaps gives some detail as to why Blatt is no longer the coach in Cleveland.