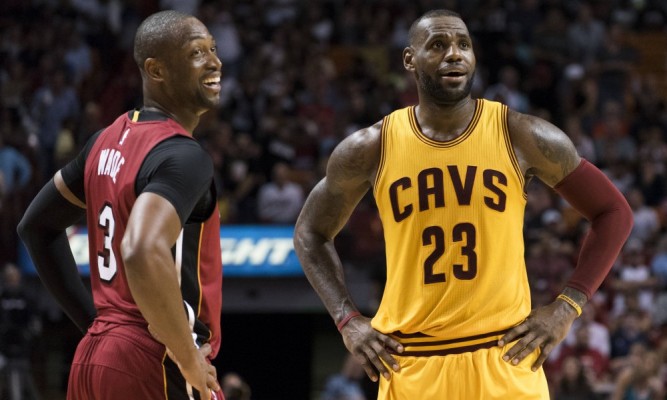 The Miami Heat‘s offseason continues to get more interesting as ESPN’s Stephen A. Smith reports that LeBron James could end up leaving the Cleveland Cavaliers for the Heat or Los Angeles Lakers this summer if the Cavs end up winning a championship.

“LeBron James promised the city of Cleveland, ‘I’m coming back to bring you that elusive title that has escaped this city since 1964.’ He never said anything about staying once he does accomplish that.

“I’m in Miami last week. I’m in Miami a few months ago. Skip Bayless, I’m hearing about a return to Miami if this man wins. He ain’t going nowhere if he loses. But, if he wins, his options are open. LA, but especially Miami, a return to South Beach.

“Look man, there’s a lot going on. And there’s a lot riding on him winning. Losing changes everything, because it keeps there in Cleveland. But more importantly, it keeps him stuck, because he knows he can’t leave until he fulfills his promise. And if you can’t because you’re not a champion, that’s far worse than just choosing to stay because you want to.

“It’s going to get very interesting. Keep your eyes on it.”

The four-time MVP will be a free agent this summer and could look to bounce after helping Cleveland catch that elusive title they’ve long been coveting. While it may seem like a pipe dream, James and Dwyane Wade‘s close friendship as well as the King’s familiarity with South Beach will play a large role in the decision.

If Smith’s comments are true, the Heat would likely receive James with open arms as team president Pat Riley noted that the team was going after a “whale” this offseason. Apart from Kevin Durant, the Cavs legend appears to be the only other whale in the upcoming free agent class.
[xyz-ihs snippet=”Responsive-Ad”]