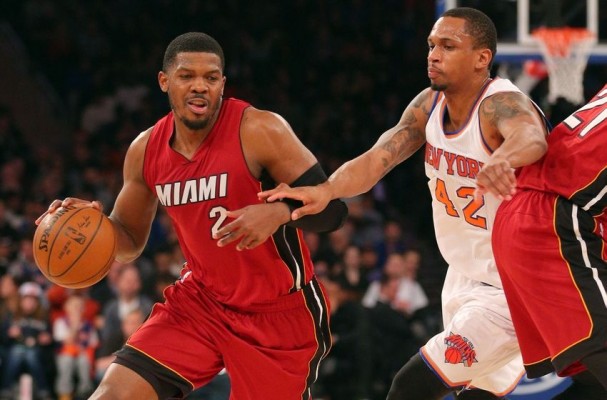 The chances of veteran guard Joe Johnson returning to play for the Miami Heat next season may be diminished, according to one source close to Johnson who cites the 15-year veteran’s likely unwillingness to take less money to re-sign with the franchise.

That news comes from Barry Jackson of the Miami Herald. Johnson signed with Miami on February 27 after negotiating a contract buyout with the Brooklyn Nets. That came after he rejected similar offers from both the Cleveland Cavaliers and Atlanta Hawks.

In 24 regular season games with the Heat, Johnson averaged 13.4 points and 3.6 assists per game, starting every contest. During the postseason, he averaged 12.1 points and 2.5 assists in 14 games, again starting in every one.

The veteran, who will be 35 years old at the start of next season made just under $25 million this past year, the final season of a six-year deal worth $123.6 million.

Though it’s certain that Johnson won’t get anything remotely close to that amount, the salary cap issues facing Miami likely limit them to offering just a $2.9 million exception deal. Depending on interest around the rest of the league, that may not be enough to sway Johnson.

In addition to Johnson, the status of Dwyane Wade, Luol Deng and Hassan Whiteside are also up in the air. While Wade has indicated that he has no plans to leave, the likelihood is that the Heat will end up having to choose between Deng and Whiteside.
[xyz-ihs snippet=”Responsive-Ad”]