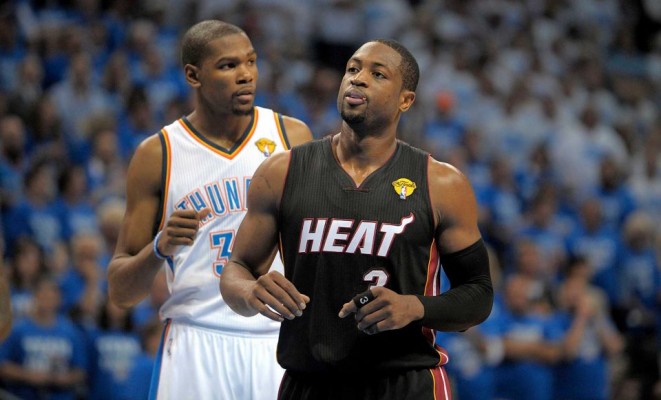 The status of Dwyane Wade for the 2015-16 season will be the subject of plenty of talk in South Florida over the next month or so, since the Miami Heat are attempting to convince him that playing for the $16 million he’s currently scheduled to make next year will pay off the following year. That strategy is due in large part to their reported pursuit after next season of Oklahoma City Thunder forward Kevin Durant.

Durant will be an unrestricted free agent after next year, with all previous speculation about his future pointing toward the Washington Wizards as a potential landing spot—if he doesn’t simply re-sign with the Thunder. That’s because of his roots in the Washington, D.C. area.

Wade has until June 29 to make up his mind about whether or not to opt out of his two-year deal. If he agrees to do that, Miami’s pursuit of Durant will become just a little easier, since a max contract for Durant has been estimated as being in the range of $35-40 million per season. That’s a steep price for any franchise, especially one that will be paying Chris Bosh $98 million over the next four years.

However, numbers like that aren’t totally out of the realm of possibility, since the salary cap will move from approximately $67 million this coming year to about $90 million in 2016-17, thanks to the massive new broadcasting deal that kicks in then. That will be followed by another jump to $108 million in 2017-18. With such huge jumps in payroll, the Heat will have more flexibility to give Wade what he wants, while also keeping a quality roster intact.

Last season, Wade agreed to opt out of the close to $42 million deal he had for two remaining seasons in the ultimately failed attempt to retain LeBron James. Wade is certainly hoping that such a team-first approach, which he’s displayed in the past, registers with Pat Riley.

To that end, even though his health has been tenuous at times the past few years, Wade is a clutch player with a championship pedigree that would work well with a player like Durant, whose Thunder team came up short to Miami in 2012. Also, Durant is used to working with a quality guard in the backcourt, having had Russell Westbrook at his side in Oklahoma City.

If past history is of any guide, Wade will once again sacrifice some salary right now for the promises of future riches when his output might not necessarily warrant it. Loyalty to the franchise and his love of the area have always been his calling cards when it comes to maintaining popularity with the fan base, and it would certainly engender good will on both sides if they can come to a deal that’s palatable for both.

Wade has long talked about the concept of being a Heat “lifer,” and staying the course in expectation of one final payoff would make him just that. He’s been a major part of all three NBA championships by Miami, and being a part of another title contender with Durant on the wing might give him enough incentive to stick around.
[xyz-ihs snippet=”Responsive-Ad”]