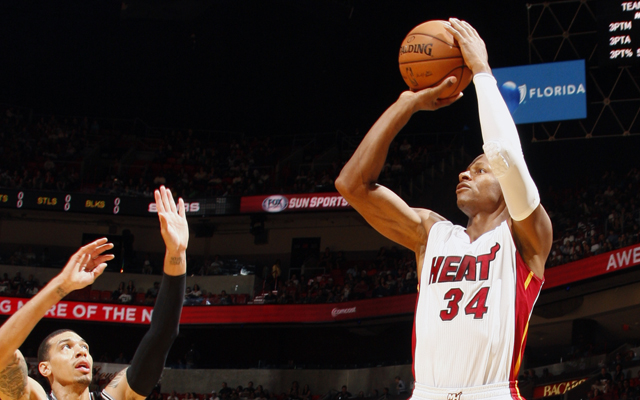 After much speculation claiming that the Cleveland Cavaliers were front runners for the best three-point shooter of all time in Ray Allen, it looks like another team has emerged in the Allen sweepstakes, your very own Miami Heat.

Miami currently has 12 players on its roster and Heat President Pat Riley stated that the team is targeting a perimeter player to back up Dwyane Wade and a big man to supplement Chris Andersen, Udonis Haslem, and Josh McRoberts.

“Probably the one area we want to shore up, is adding another perimeter player. . . . But we’re not in a rush now. Probably another wing man and also another big,” said Riley.

However right now, the team’s top priority seems to be Allen. Riley has already touched base with Ray Allen’s agent and said, “We haven’t moved on. My conversations with his agent, I’ve been told he has not made a decision with anything.”

On the other hand, Steve Kyler of Basketball Insiders has continually stated that Allen is leaning towards retirement and if anyone has a shot at obtaining him, its the Cavs.

“I can say what we’ve been told is Ray is done. But I think that’s far from decided officially. I think he is done for now and comes back in December or January. As for Cavs, who knows, people act like he and LeBron are life long friends. I think the Cavs have as good a shot as anyone.”

But before Allen decides to officially make any kind of decision, according to Brian Windhorst of ESPN, Allen plans to get an MRI on his legs first.

Ray Allen told Sina in China he planned to return Thurs. & get MRIs on his legs before making future decision. Numerous teams interested.

Whether Allen plans to retire, join forces with the Heat, or join LeBron James on the Cavs, one thing is for certain, everything is going to be under Ray’s terms.

“One thing is for certain, to [make a retirement decision] on my terms is the most important thing. Whether that is me retiring, staying here or going somewhere else, it will be on my terms. I’ve made it to this point, and I felt great that I have the choice to make it for myself.”