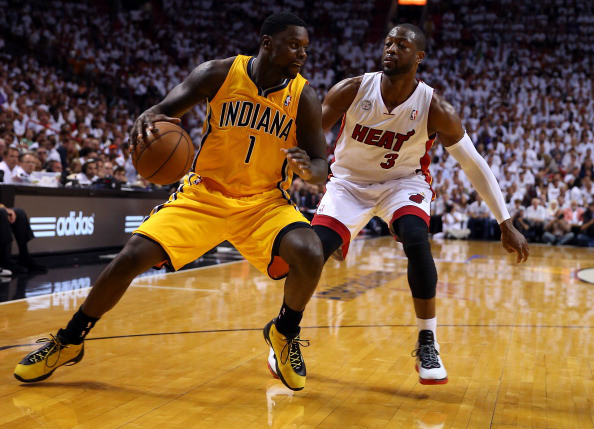 If anyone thought NBA free agency couldn’t get any zanier as the basketball world awaits the fate of LeBron James, things may have gotten even crazier with the Miami Heat’s latest interest. According to Dan Le Batard of ESPN, the Heat has inquired about pesky, yet multitalented guard Lance Stephenson. Stephenson, who averaged a career-high 13.8 points, 7.2 rebounds and 4.6 assists last season with the Pacers, gained infamy among Heat players and fans throughout the year.

The 23-year-old guard stirred up trouble with Dwyane Wade during a game between the Heat and Pacers in March, getting ejected after a verbal exchange with Wade during the fourth quarter. Stephenson’s antics then continued towards James during the Eastern Conference Finals. From blowing into James’ ear and sneaking into the Heat huddle during a timeout, Stephenson developed a reputation as an edgy competitor. Stephenson’s eccentric behavior throughout the series didn’t sit well with Pacers president Larry Bird, Pacers Head Coach Frank Vogel and teammate Paul George, as George didn’t exactly offer support towards the team re-signing Stephenson.

“I mean, I don’t know,” George said of Stephenson, following the Pacers’ season-ending loss to the Heat in Game Six of the Eastern Conference Finals. “That’s for Larry [Bird], [general manager] Kevin [Pritchard], for them to decide.”

Stephenson has reportedly turned down a five-year, $44 million offer from the Pacers, leaving the sides in a stalemate. Stephenson’s arrival to South Beach will definitely have an effect on whether or not James chooses to stay, considering the manner in which Stephenson conducted himself towards James during the playoffs. Stephenson showed a profound respect for James after the series, as he gave him a post-game hug and offered endearing words for the multiple-time Most Valuable Player through his Instagram account.

“I have much respect for LeBron and the Heat. This was a great series they deserve it all, love to [the] Heat. Want to say that I’m so proud of my teammates we work so hard all year to get to [this] point, Everything is a learning experience and getting better every year love u guys Pacer nation and thanks to all of our Pacer fans love y’all too,” Stephenson wrote on Instagram.

Wade is likely to return on a pay cut and retire with the Heat, but the possibility of teaming with Stephenson may sway him to reconsider his decision, especially considering the fact that both playing at shooting guard may give way to a testy competition for a starting spot. On a positive note, Stephenson has been an overall dynamo on the court, coming off a career year that included 49 percent shooting from the floor. His ability to beat defenders off the dribble and create scoring opportunities for himself and teammates will be highly coveted to the Heat’s lineup. If James leaves Miami, Stephenson would be a solid consolation for Heat President Pat Riley. His outlandish attitude may rub players, coaches, fans and executives the wrong way, but his consistent and impactful skill set will certainly be Indiana’s loss and Miami’s gain.