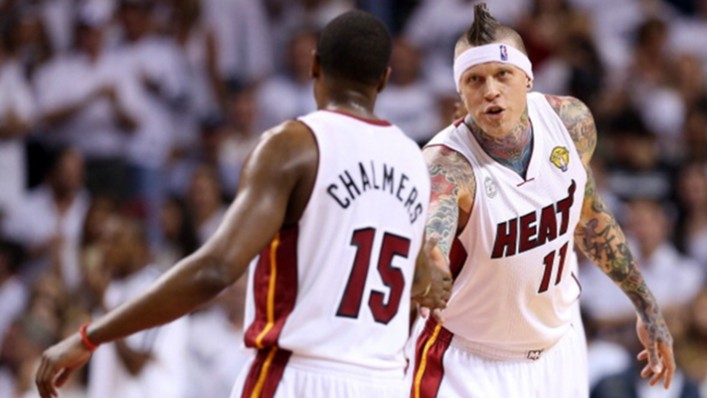 The Miami Heat are dedicated to shedding payroll, which means a couple of battle-tested veterans may be on their way out.

While it’s been known that Chris Andersen and Mario Chalmers have been on the trade block the last few weeks, a new report by Zach Lowe of ESPN illustrates how much the franchise wants to cut payroll. Lowe states that Andersen and Chalmers “are available for nothing”:

“Mario Chalmers and Chris Andersen are available for nothing, per several league sources, and the Heat have even put out Shabazz Napier feelers with an eye on carving out extra cap room next summer.”

The team has agreed to terms with Dwyane Wade on a one-year, $20 million deal and Goran Dragic on a five-year, $90 million this offseason. The Heat face a large tax bill with both of those players returning.

Andersen is due to earn $5 million while Chalmers is to earn $4.3 million during the 2015-16 season. Each player has an expiring contract following the season.

Though both players have played key roles during the championship years of the franchise, they don’t have much of a future in Miami. Andersen is 37 years old and was slowed down by injuries last season, while Chalmers just had the worst three-point shooting season of his pro career (29.4 percent).

Andersen is best used as a high-energy, shot-blocking specialist for a team that doesn’t expect any offense from the center. The problem is, the Heat need scoring from their bigs off the bench. The veteran can’t provide that, as he’s averaged just 5.8 points per game in three seasons with Miami.

Dragic will be the starting point guard, while Tyler Johnson will be retained for depth purposes. Assuming he’s not dealt, Shabazz Napier will play a role off the bench at point guard. This leaves almost no purpose for ‘Rio to be on the 2015-16 roster, especially when considering his salary.

Changes are abound in Miami, the only question is who will be dealt?
[xyz-ihs snippet=”Responsive-Ad”]