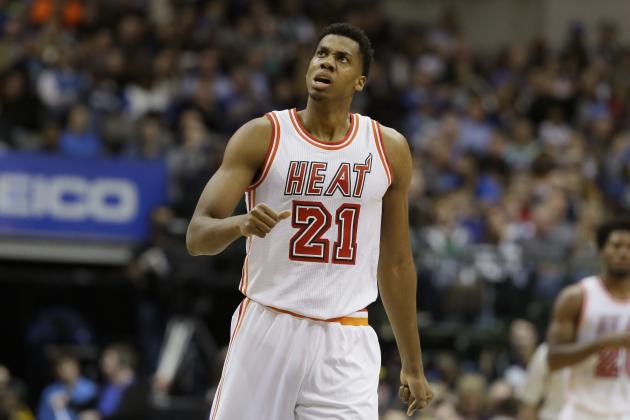 The Miami Heat are open to trading Hassan Whiteside, according to ESPN’s Chris Broussard.

While the Heat are open to trading the 26-year-old center, there are a couple of problems that exist that will make it very hard for the team to trade Whiteside. One of the issues is that his salary of $981,348 makes it nearly impossible to trade him without attaching other players to the deal.

Secondly, Whiteside will become a free agent in 2016. It leaves very little reason for a contender with valuable pieces to trade for Whiteside when there is no guarantee he will re-sign with that particular team after the conclusion of the 2015-16 season.

While the young center is dazzling with his stat line of 12.2 points, 11.0 rebounds and 3.9 blocks per game, advanced statistics don’t portray as nice of a picture—opponents are shooting 47.9 percent at the rim versus the 7-foot Whiteside. It is a number that would be lower if Whiteside didn’t spend as much time trying to swat shots.

The team has also dealt with numerous on-court incidents with the young center during his one-and-a-half year run with the Heat. The former second-round draft pick purposely elbowed San Antonio Spurs center Boban Marjanovic in the fourth quarter of a 119-101 loss on Tuesday night. Following the incident, the team sent Whiteside home.

The Heat may be just gauging trade interest for their young center, but don’t be surprised if Pat Riley is able to conjure up a trade scenario that sees Whiteside leave South Beach before the trade deadline.
[xyz-ihs snippet=”Responsive-ImagenText”]