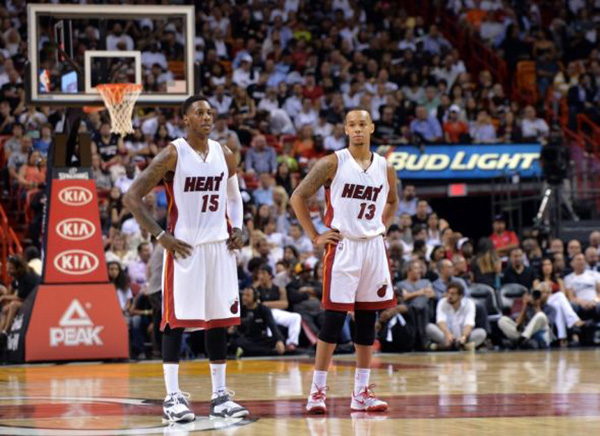 The Miami Heat are “aggresively” trying to trade point guards Shabazz Napier and Mario Chalmers, according to a report from Barry Jackson of The Miami Herald.

Here is the full excerpt from the Herald:

“An NBA general manager said Mario Chalmers and Shabazz Napier are the players the Heat has been most aggressive in shopping, with Miami preferring to move Chalmers because of his $4.3 million salary.

“The GM said the Heat would be content getting back only a second-round pick (or less) for Chalmers. Though Chris Andersen could be moved, the GM said the Heat hasn’t offered him to his team, and that Miami hasn’t shown an inclination to move Josh McRoberts.”

The report seems to match prior rumors that the Heat have placed Napier, Chalmers and Chris Andersen on the trading block. With Miami essentially having 18 players vying for 15 roster spots for the upcoming season, it would only make sense that they’re trying to shed salary and clear up roster space through trade. An NBA team is only allowed to have a maximum of 15 players on its roster during the regular season.

The Heat currently owe more than $10 million in the luxury tax and would save a lot of money by trading Chalmers and/or Andersen ($5 million salary in 2015-16).

We’ll see over the coming weeks whether or not Miami is able to unload some of their contracts before the start of training camp.
[xyz-ihs snippet=”Responsive-Ad”]