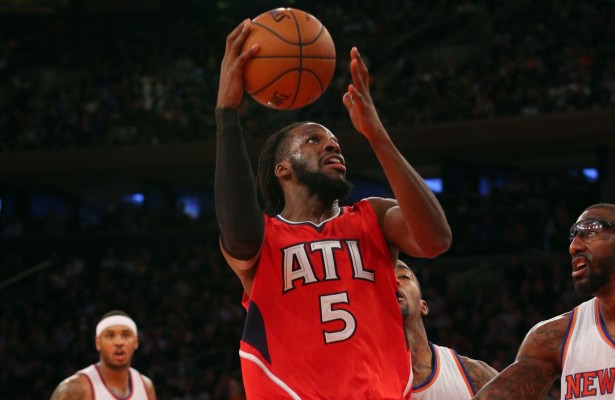 It may be too early for Pat Riley and Erik Spoelstra to talk about other teams’ free agents this summer, but the NBA’s tampering rules don’t apply to us.

So let the speculation begin.

Assuming (1) the Heat lock up point guard Goran Dragic to a long-term contract when the free agent signing period opens up sometime in the second week of July, (2) Chris Bosh is fully cleared by his medical staff to resume regular season action, and (3) Luol Deng opts in for the 2015-16 season, the team will need to add players to complement next season’s projected starting lineup of Dragic, Dwyane Wade, Bosh, Deng and Hassan Whiteside.

One intriguing possibility to fortify the Heat roster is forward DeMarre Carroll, who is currently playing for the Atlanta Hawks in the Eastern Conference playoffs. Currently, Carroll’s Hawks are in a tough second round series with the Washington Wizards.

The 28-year-old, 6’8″ 212-pound former Missouri Tiger was drafted at the tail end of the first round in 2009 by Memphis and played sparingly for the Grizzlies, Houston Rockets and Denver Nuggets through his first couple of years out of college.

But in 2012, he gained a foothold with the Utah Jazz and parlayed a scrappy, never-give-up attitude into a two-year, $5 million contract with the Hawks in 2013.

He averaged 12.6 points (a career-high) and 5.3 rebounds this past season with the Hawks, and has bumped up those numbers to 17.0 and 6.2, respectively, through the first ten games of the 2015 playoffs.

And although he’s arguably been the best player for the Hawks in the postseason, he ironically was the only starter on Atlanta to not make this year’s All-Star team.

Yes, it is a good time to be DeMarre Carroll. His stock is soaring right now, and there will be plenty of suitors for his services this summer, including the big-spending New York Knicks, Los Angeles Lakers and Dallas Mavericks.

Apart from the stiff competition the Heat will face in the free agent market for Carroll, Pat Riley will have to work some salary cap magic to sign Dragic and Carroll this offseason while maintaining enough flexibility to re-sign Hassan Whiteside next summer.

The math is tough, but not impossible, especially for a deft operator like Riles and an owner who is committed to winning like Micky Arison. For now, let’s assume they come through.

So how might Carroll fit in with the Heat? Let us count the ways.

Carroll’s size and athleticism make him a solid front-court contributor, either as a small forward or power forward. Heat coach Erik Spoelstra would likely bring Carroll in off the bench for Luol Deng, but the five-year veteran would also represent an insurance policy for Chris Bosh if Bosh is limited in any way when he returns to action.

Or, Spoelstra might choose to start Carroll over Deng, although at $10 million-plus, Deng would be an expensive reserve. The Heat might lose some offensive punch with Carroll starting, but they would gain some tough-minded defense. In fact, Whiteside and Carroll could turn the paint into a no-fly-zone when they’re together on the court.

But Carroll’s offensive skills should not be underestimated, either. The Hawks generally do not run any set plays for Carroll — he gets most of his points on putbacks and scramble plays around the rim. He has a nose for the ball, which has earned him the nickname “Junkyard Dog.”

But he has expanded his repertoire to include a surprisingly sharp touch from beyond the arc, and he has pretty good handles, too, and is not afraid to attack the basket.

So, Spoelstra might even consider implementing a platoon system at the small forward position, alternating Carroll and Deng’s starts depending on the opponent and the matchups.

Of course, the players themselves would have to be on board for these scenarios to work, and it seems unlikely that either Carroll or Deng would accept anything less than a regular starting job with the Heat.

As mentioned above, Deng has a player option for next season. If the Heat could somehow persuade him to opt out and re-sign for less, that could create room for Carroll in their salary cap and keep the team below the luxury tax threshold for 2016, when Whiteside hits free agency.

Dwyane Wade also has a player option for next season at over $16 million. But would he be willing re-negotiate down to grease the skids for the Heat to sign Carroll? Especially if Deng opts in for next season?

Wade may have been willing to ball for the only team he’s ever played for at a discounted rate when LeBron James was his teammate, but DeMarre Carroll — for all his talent — ain’t King James.

It might make more sense for Wade to lower his fee next season to allow the Heat to re-sign Whiteside.

At this point, Deng appears to be the lynchpin in the Heat’s pursuit of Carroll, because it is hard to imagine keeping Deng at his salary cap number and signing Carroll to $7-8 million per year, which is the annual dollar amount most experts expect the “Junkyard Dog” will command.
[xyz-ihs snippet=”Responsive-Ad”]