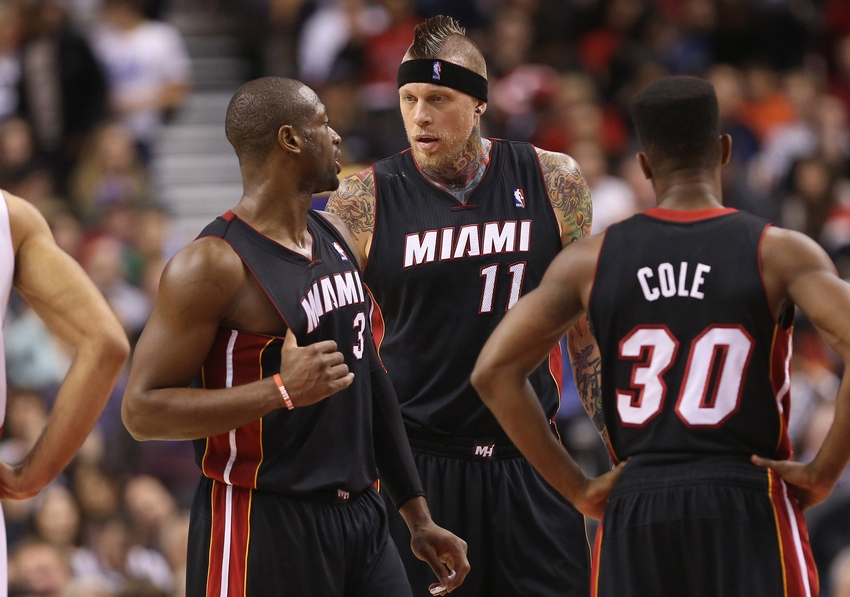 After an offseason characterized by major roster changes, it seems as if the Miami Heat may not be done making moves just yet.

According to Ethan Skolnick of Bleacher Report, the Cleveland Cavaliers are interested in trading for Norris Cole and Chris “Birdman” Andersen of the Miami Heat.

Andersen seems like a logical addition for the Cavs, who are seeking more defense and a veteran rim protector. After signing with the Heat down the stretch in 2012, Andersen has seen a career resurrection and his energy on both ends of the floor can be an asset to any team.

Cole is a more perplexing trade target, despite having more than a little Ohio in his blood after growing up in Dayton and playing his college ball at Cleveland State.

The Cavs already have a scoring point guard in Kyrie Irving, and despite the 26-year-old Cole’s proven ability to contribute in key spots, he doesn’t seem like a natural fit for what Cleveland is trying to do. However, Cole has long been a fan of LeBron James, and a reunion in his home state may be enticing for him.

But aside from the hometown connection, it’s hard to see how this deal could take place in the near future.

First off, I don’t see Cleveland being willing to part with any of the pieces that Miami may ask for in return. Cavs fans and coaches alike fell in love with Matthew Dellavedova’s heart and energy last season, and I don’t see the team shipping him elsewhere. Second round pick Joe Harris has also been impressive in his rookie campaign, and with those two being mentioned as the most likely assets to be dealt, I don’t see a deal anywhere on the horizon.

In addition, Andersen just signed a two-year, $10 million dollar deal with the Heat this offseason, meaning he isn’t eligible to be traded until after December 15th. That could put a damper on the Cavs plans, but only time will tell if that will be a deterrent or simply a delay in the process.

According to Skolnick, Cleveland may not be the final destination but that doesn’t quite mean Cole and Andersen are staying in Miami either.

@M3X2music @TheTicketMiami Don’t know if they’ll end up there, but those are the 2 names I keep hearing in trade whispers.

After watching some of their favorite players bolt this offseason, it may be difficult to hear that two more key contributors from the team’s two NBA titles could be on their way out.

But after LeBron James’ departure this summer, Pat Riley vowed to make moves that would continue to keep his team competitive. If Riley feels that he has an opportunity to improve the roster by dealing either Cole or Andersen, it could be time for another painful goodbye in Miami.
[xyz-ihs snippet=”Responsive-ImagenText”]