Report: Miami Heat Have Made Two Stars Available in Exchange for Jimmy Butler 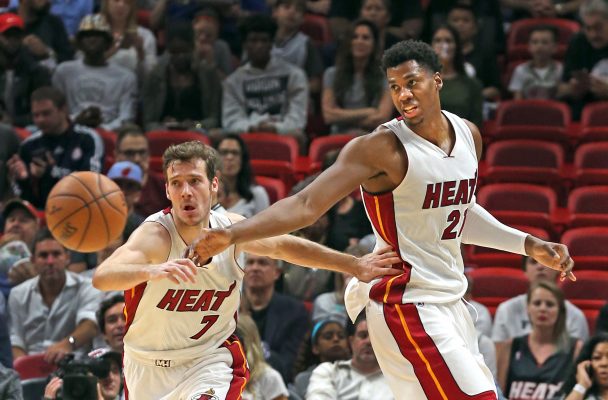 The Miami Heat and Minnesota Timberwolves remain at ends on any deal to bring Jimmy Butler to South Florida.

As the weekend draws closer, more and more information is leaking about a potential move on the horizon. After being uninterested in any trade that involved Josh Richardson and Bam Adebayo, the Heat are reportedly willing to offer two other young stars in return for the 29-year-old veteran.

According to Darren Wolfson, Miami would be willing to give up Goran Dragic and Hassan Whiteside as pieces in a potential trade. Dragic made the All-Star team last season, but is nearing the tail end of his career. Whiteside, who turns 30 after the 2018-2019 season, makes $22.12 million a year. Even though he has been playing for the team for four years, the organization would certainly be happy to move his contract elsewhere.

As it stands, the Timberwolves find themselves in a predicament. The Heat are not only the forward’s ideal spot to land, but seem to be the most interested in dealing for the Houston, Texas native. While they are in search of someone along the lines of Richardson, that offer doesn’t seem to exist for the time being.

Moving forward, if the Timberwolves refuse to agree to terms with any potential Heat offer, the Heat might have to seriously look at relinquishing their grip on Richardson. A superstar like Butler could elevate the team to a tough contender in the Eastern Conference. As the season looms on the horizon, look for the discussion to continue throughout the week.
[xyz-ihs snippet=”HN-300×250-TextnImage”]