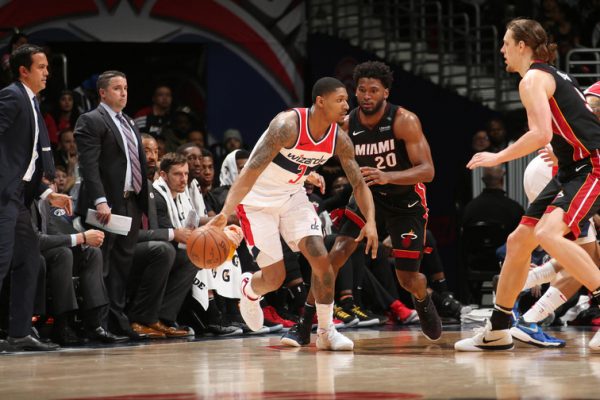 With the trade deadline just three weeks away, Miami has made it known that the franchise is looking for top-tier talent.

One big name that continues to pop up in conjunction with the Heat is Washington Wizards guard Bradley Beal.

“Wizards guard Bradley Beal continues to be a player the Heat are circling back to with heavy interest, according to a source,” wrote Sylvander. “Washington’s asking price thus far appears astronomically high and likely too steep, but Miami considers Beal a frontline star with upside.”

Currently, the Heat are struggling to carve out roles for multiple talented players including Dion Waiters and Wayne Ellington, so it’s not unimaginable that they could be used as trade pieces in a deal with the Wizards.

Dion Waiters is NOT happy with his role after coming back from injury. ? pic.twitter.com/Xja7SYpAOQ

However, that “astronomically high” asking price would likely also include multiple first-round draft picks and those are assets Miami will likely be reluctant to part with.

If Miami truly is in the running for a star player like Beal, deadline day on Feb. 7 could be a fascinating one.
[xyz-ihs snippet=”HN-300×250-TextnImage”]